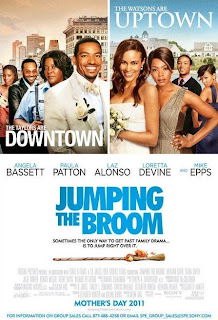 Jumping the Broom is a 2011 comedy and drama film that focuses on an African-American wedding. In fact, the film’s title is taken from an African-American tradition in which the bride and groom jump over a broom after being married. In the movie, two very different families meet and clash on Martha’s Vineyard in the days leading to the sudden wedding of a young couple.

Jumping the Broom focuses on Sabrina Watson (Paula Patton) and Jason Taylor (Laz Alonso), who are engaged to get married after knowing each other for only half a year. Jason’s family, the Taylors, is a downtown working class family from Brooklyn. Sabrina’s family, the Watsons, is an uptown group, and her parents have an estate in Chilmark on the island of Martha’s Vineyard.

Jason’s mother, Pam Taylor (Loretta Devine), is very upset that Jason is getting married to Sabrina at the last minute. Sabrina’s mother, Claudine Watson (Angela Bassett), is just as upset as Pam about this quickie marriage. What most upsets both mothers, however, is that they barely know each other’s family. As the two families come together at the Watson’s estate for the two-and-a-half day wedding event, everyone knows that class warfare is about to ensue. But no one suspects that some ugly family secrets are about to spill out into the open.

Obviously, Jumping the Broom is a hyper-idealized version of what happens when families get together for a big, busy, complex, and problematic event like a wedding (or a funeral). The things that this movie gets right are the petty feuds, unresolved disputes, simmering grievances, clashes of culture and class, the egos, the jealousies, the cheating, the selfishness, the marital discord, the second thoughts, etc. I could go on, but if you have a large enough family and have been to a big family get together, you know the pain and this movie will be painfully familiar. Jumping the Broom is good because it takes the pain and ugliness and shows us the good side of two families coming together for the first time, while spinning some remarkably sharp comic insights.

The film has some problems. Some of the dialogue is stiff, or is that just some bad acting? Also, there are way too many characters. DeRay Davis’ Malcolm has potential, but is extraneous here, as he pretty much serves the same purpose as Mike Epps’ Willie Earl Taylor, but less effectively. On the other hand, there is absolutely not enough of Vera Cudjoe’s Mabel.

Posted by Leroy Douresseaux at 1:24 PM