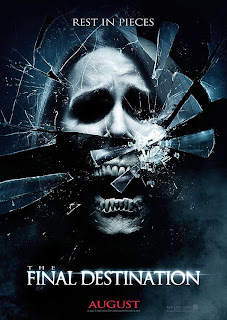 The Final Destination begins with four young friends enjoying car racing at McKinley Speedway. One of them, Nick O’Bannon (Bobby Campo), has a premonition of a terrible car crash that leads to the deaths of several people, including him and his friends. Nick persuades his girlfriend, Lori Milligan (Shantel VanSanten), and their friends, Janet Cunningham (Haley Webb) and Hunt Wynorski (Nick Zano), to leave. There is indeed a horrendous multi-car crash that leads to death and devastation, but Nick, his friends, and several other people who were supposed to die survive.

Sometime, after the crash, Nick hears that a few of the survivors have been killed in bizarre accidents. He also discovers that there were other disasters in which one of the survivors had a premonition which saved lives. When he learns that those survivors died one by one in strange accidents, Nick starts to believe that Death is also stalking the survivors of the McKinley Speedway crash. Nick and Lori join another survivor, security guard George Lanter (Mykelti Williamson), and set out to break the chain of deaths and hopefully save as many lives as possible. But does Nick really understand how this game of Death works?

The characters are weak and are barely interesting and few of them are even likeable. It is not so much that you care about them; it’s just that you only anticipate the next horrible depiction of violent and bizarre death every time they are on screen. So, the movie works even without having at least one outstanding character, although Mykelti Williamson as George and Andrew Fiscella as the mechanic Andy Kewzer stand out by making something of the nothing the screenplay gives them.

The Final Destination is fun and has the best ending since the original film. It makes me look forward to the next installment.