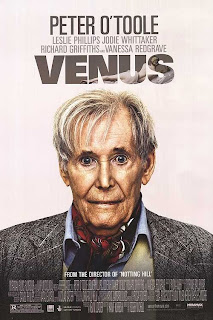 DRAMA with elements of comedy and romance

In Roger Michell’s film, Venus, a kind of dark romantic comedy, Maurice Russell (Peter O’Toole), a veteran stage and screen actor, finds the end of his life turned topsy-turvy when he meets Jessie (Jodie Whittaker), a relative of his dear, long-time friend, Ian (Leslie Phillips). Suddenly, Maurice’s mind is inundated and beleaguered by thoughts and feelings of lust upon which his body can no longer react. Jessie finds the old man’s charm and exuberance off-putting because she sees him as decrepit, but is soon dealing with complimentary feelings towards him that only confuse her more.

Two things make Venus memorable. First is Peter O’Toole’s Oscar-nominated performance as an old, old man who becomes aware of his heart rediscovering how painfully intense falling in love can be. Lust has also reared its insistent head, and O’Toole makes that evident in every physical nuance of his performance.

The second element that makes this film is Hanif Kureishi’s script. Kureishi received an Oscar nomination two decades ago for My Beautiful Laundrette, and like that film, Venus deals in unvarnished real folks. Even Maurice, the elegant (and once handsome) actor of both stage and screen, is broken and riddled with imperfections. Kureishi doesn’t pretty up Maurice’s desire for Jesse, nor does idealize the relationship between Maurice and “Venus,” as Maurice calls Jesse.

Director Roger Michell (Persuasion, Notting Hill) recognizes what is complex and troubling in these characters, and the complexity of their relationships with one another. He keeps the viewer guessing with this dark comedy, a romantic drama that doesn’t dabble in the warmth and silliness of many film romances. There is a lot of unease here, and desire, love, and lust is raw and not pretty. In Venus, that may actually be a beautiful thing.