Thanks for the Movie Memories, Bubba Smith: Police Academy 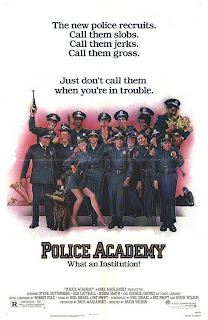 Police Academy is a comedy film that debuted in early Spring 1984 and went on to become a box office smash hit. The film also spawned six sequels, an animated television series, and a short-lived live action TV series.

The movie takes place in an unnamed city. The newly-elected mayor decides that the Police Academy will now be open to any and all applicants regardless of height, weight, sex, intelligence, etc, and the floodgates of oddities and eccentrics bursts open. The story focuses on a group of good-hearted, but incompetent misfits led by Cadet Carey Mahoney (Steve Guttenberg), a prankster who was forced to join the Academy to avoid jail time. The instructors, in particular Lt. Thaddeus Harris (G.W. Bailey), are not going to put up with Mahoney’s pranks, and Harris is also determined to get rid of any cadet who wouldn’t have made it into the Academy under the old rules. However, Mahoney is determined not to let Lt. Harris get his way, so he leads his misfit friends into proving that they can protect and serve.

The 1984 R-rated Police Academy spawned a slew of PG-rated sequels, and while some of them are funny, the original is still the best. Over two decades later, the first film is still as funny today as it was then, and I have to admit to laughing hard and often while watching this. Basically, Police Academy was the Anchorman and Dodgeball of its day. The script doesn’t let you know the characters, although the jokes and humor are almost entirely character based. There isn’t a whole lot of comedy based on the setting (except for a gay bar); these characters could be played for jokes even if they weren’t at a Police Academy (in fact, future films often moved them outside the Academy).

Co-writer/director Hugh Wilson and fellow writers Neal Israel and Pat Proft (both known for writing movies that send-up or spoof just about anything) keep the often juvenile humor coming, and most of it works. Also, one cannot over emphasize how important the affable and likeable Steve Guttenberg playing the smart-assed/wise guy/jokester was to making this franchise’s early films work so well.

Posted by Leroy Douresseaux at 7:27 AM