"Drag Me to Hell" is Gross-Out Fun 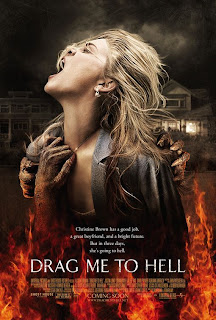 HORROR with elements of comedy and thriller

The Sam Raimi who directed The Evil Dead films has returned to his demonic spirits-gone-wild roots with the new film, Drag Me to Hell. Before he directed the Spider-Man films, Raimi unleashed ghoulish, comic horror movies that featured, among other things, preposterous scenes of mutilation and slapstick dismemberment, in flicks like Evil Dead II (1987) and Army of Darkness (1992). Drag Me to Hell is essentially from the same family as those scary movies. It’s like EC Comics on crack with a steroid chaser – and rated PG-13!

This film focuses on the soft-hearted Christine Brown (Alison Lohman), an ambitious L.A. loan officer for WilshirePacific Bank. Christine also has a charming boyfriend, Clay Dalton (Justin Long), who has recently become a philosophy professor, but all is not well. The winsome girl with a dazed look in her eyes is tired of being life’s punching bag. She knows that Clay’s mother doesn’t like her (although they’ve never met), and at work, a cheesy co-worker, Stu Rubin (Reggie Lee), is scheming to snatch a promotion from her. When the mysterious, one-eyed Mrs. Ganush (Lorna Raver) shows up at the bank and begs Christine for an extension on her home loan, Christine decides not to follow her instincts and give the old woman a break. Instead, Christine denies the extension in order to impress her boss, Mr. Jacks (David Paymer), and, in turn, get an edge in the battle for the promotion.

Christine’s fateful choice shames Mrs. Ganush and essentially dispossesses Ganush of her home. In retaliation, Ganush, a rotten-toothed old gypsy woman, places the powerful curse of the Black Lamia on Christine, which transforms the young woman’s life into a living hell. Almost immediately, the evil spirit starts to haunt and torment Christine, and her plight is misunderstood by her skeptical boyfriend. Christine seeks the aid of a seer, Rham Jas (Dileep Rao), in hopes that he can tell her what’s happening. What Christine learns is that after three days of tormenting her, the Lamia will drag her soul to hell to burn for eternity.

Perhaps, it is Allison Lohman loveable, huggable, girl-next-door quality that makes it easier for the viewer to sympathize with her and even want to take on her troubles. Maybe it’s Raimi’s ability to scare the hell out of his audience with cartoonish, ghoulish nightmares – or maybe both. Whatever the reasons are, Drag Me to Hell gets in your head. Raimi does that by creating a hellish carnival atmosphere: the kind where the ticket salesman is a hideous, curse-spewing crone; where the fun house is a level of hell; and where the cotton candy maker is a jack-in-the-box full of wormy devils. The film is also very old school; Raimi often creates the sense of creeping dread by using atmospherics like shifty shadows and sound effects. This film even features a favorite Raimi trademark – a demonic possession

Drag Me to Hell is also filled with wonderfully deranged sequences. The first physical altercation between Christine and Mrs. Ganush is film’s best confrontation, and it involves nothing but hands, feet, and teeth – nothing supernatural until the end of it. In fact, Mrs. Ganush is a great character, conceived to be a physically aggressive granny who is as delightfully vindictive as she is demonic and ghoulish.

You’ll laugh. You’ll scream. You may even laugh at your own gullibility, but Sam Raimi has returned to the wretched roots of his filmmaking – bugf*ck crazy horror movies. Drag Me to Hell isn’t perfect; there’s too much of a focus on Alison Lohman’s Christine to the detriment of the other quality characters (like Justin Long’s Clay and Dileep Rao’s Rham Jas, for instance). Still, its mixture of blood-curdling terror, gross-out horror, and inspired lunacy make Drag Me to Hell one of the most entertaining horror flicks in years.

Posted by Leroy Douresseaux at 2:01 PM