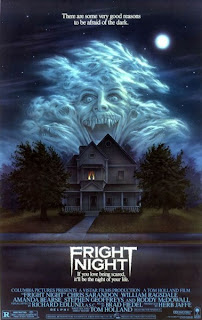 Fright Night is a 1985 horror film written and directed by Tom Holland. A hit at the time of its original release, Fright Night was successful because it was a horror movie that was both scary and funny. This film is about a teenager who discovers that his new next door neighbor is a vampire, but can’t make anyone believe him.

The story centers on Charlie Brewster (William Ragsdale), a mostly ordinary high school boy trying to convince his girlfriend, Amy Peterson (Amanda Bearse), to go all the way and have sex with him. Charlie also has an active imagination and is huge fan of horror films and of Peter Vincent (Roddy McDowall), the host of a local horror movie television program.

Charlie’s active imagination kicks into overdrive when two men move into the empty house next door to Charlie and mother, Judy Brewster (Dorothy Fielding). By chance, Charlie discovers that one of the men, the dark and seductive Jerry Dandridge (Chris Sarandon), is a vampire. Charlie tells Amy and his acerbic friend, Edward “Evil Ed” Thompson (Stephen Geoffreys), but they don’t believe him. The police also ignore him, and even Peter Vincent isn’t buying Charlie’s story. Charlie will need to convince someone soon, because Dandridge and his roommate/carpenter/bodyguard, Billy Cole (Jonathan Stark), are preparing to kill Charlie.

I believe that film spoofs work best when they look like the genre in which they are spoofing. Mel Brook’s Blazing Saddles convincingly looks and acts like a Western, so its skewering of the conventions of Westerns is supremely effective. It’s the same with Brooks’ Young Frankenstein, a send-up of Universal Pictures’ black and white horror films. Fright Night is a genuine horror film, but the screenplay takes so many digs at the conventions and stereotypes of vampire movies – from the way movies depict vampires’ fear of the crucifix to the way movies portray vampires seducing female victims.

Even with its humor and gentle mocking tone, Fright Night is a scary movie. I am old enough to have seen it in a theatre when it was first released back in August of 1985. Fright Night was both an old-fashioned monster movie and a vampire movie with a devilishly alluring villain as the vampire, superbly played by actor Chris Sarandon with cool, smooth arrogance and a dark charm. Fright Night was so different from the horror movies that thrived back in the 1980s. These were bloody slasher movies featuring masked maniacs wielding any kind of implement that could gouge and slash out the most blood from their victims. The young actors playing the victims were not interesting and were merely meat for the slasher film beast.

That’s different in Fright Night. The characters are either surprisingly witty or appealingly silly. I can see why this film has been remade. Every time I watch it, Fight Night works its scary movie magic on me.

Posted by Leroy Douresseaux at 8:05 AM