First "Conan the Barbarian" Still a Beast of a Movie 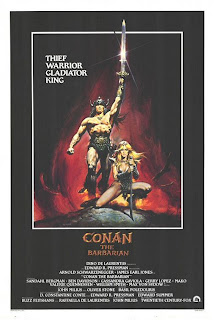 Young Conan (Jorge Sanz) saw his father (William Smith) murdered by a band of marauders who attacked their village. Conan’s mother (Nadiuska) took on the marauder’s warlord, Thulsa Doom (James Earl Jones), in a sword duel before Doom beheaded her. Doom’s soldiers subsequently sold Young Conan into slavery. The intense labor he endures as a slave (pushing a giant grinding wheel) transforms the adult Conan (Arnold Schwarzenegger) into a sinewy, muscular giant. Before long, opportunistic men further transform him into a skilled gladiator, who can outfight any man and probably kill at will.

Conan however becomes a thief. His companions are two mercenaries – the comely warrior woman, Valeria (Sandahl Bergman, who won a Golden Globe in 1983 for “Most Promising Newcomer of the Year in a Motion Picture – Female, an award the Globes stopped giving over two decades ago), and the sword fighter, Subotai (Gerry Lopez). The trio is captured by a grieving monarch, King Osric (Max Von Sydow), whose daughter joined a powerful snake-worshipping cult. His offer of riches to rescue her puts Conan on the path to avenging the murder of his Cimmerian tribesman and family. Osric’s daughter, The Princess (Valérie Quennessen), plans to marry the leader of this cult, which rules the land far and wide, his name – Thulsa Doom, the villain who murdered Conan’s mother. Revenge won’t come easy, Doom wields powerful magic, and his army is many and strong.

Before the age of computer generated effects, filmmakers of fantasy films relied on in-camera effects, hand drawn animation, makeup effects wizards, and mechanical puppets and creature effects to transport viewers to worlds that looked like ours, but were filled with warriors, kings, princess, monsters, and powerful wizards. There were no computer-generated combatants to fill imaginary epic battlefields (as in The Lord of the Rings). Stuntmen and fight coordinators who specialized in martial arts and hand-to-hand combat, animal wranglers to handle horses, prop masters and weapons makers, etc. had to use their wits and skills to create believable battle scenes. Often, the actors and actresses had to get down and dirty and perform their own stunts – do their own fighting.

To direct this kind of film, a producer would have to find a director who is a man’s man, one who made movies for guys – guys who love movies (as the TNT slogan goes). Filmmaker John Milius has spent his career writing or directing (and sometimes both) tough guy adventure epics. His resume includes script writing for Apocalypse Now and Clear and Present Danger. He also wrote and directed the semi-cult classic, Red Dawn.

Milius took on the ultimate action hero actor, Arnold Schwarzenegger, early in the actor’s movie career in the film, Conan the Barbarian. The two work magic. Schwarzenegger isn’t a great actor in the classic tradition of playing a diverse body of characters and burying oneself in those roles. He is, however, a movie star – an actor who really looks like nothing else but an actor when the camera starts filming. Arnold as Conan has more than a ring of truth to it because Arnold has The Presence.

Milius puts it all together. Conan the Barbarian is a fine epic flick filled with burning villages, screaming peasants, murderous marauders, and devious women wielding sex and offering their supremely well-built bodies to men all-too-ready to get laid at the drop of a loin cloth or at the peek of boob flesh. Milius (who co-wrote the script with Academy Award winning director Oliver Stone of Platoon and JFK) gives up little fights, man on man tussles, and superbly staged battles of testosterone-fueled men stabbing, slicing, cutting, and gutting one another; of horses racing, falling, and dying on top of their riders; and of death on the battlefield.

In addition to Schwarzenegger, the rest of the cast also performs well. James Earl Jones is madness personified as the murderous, egomaniacal, and insane Thulsa Doom. Sandahl Bergman as Valeria and Gerry Lopez as Subotai hit the right notes as Conan’s thieves-in-arms. Milius’ crew of technicians, craftsman, and stuntmen also give him a superior effort. Basil Poledouris’ score is picture perfect; very few movies about men with swords fighting each other ever had music so good. Milius takes the Poledouris’ music and mixes it with the rest of his ingredients to create a truly entertaining guy’s fantasy flick. Conan the Barbarian isn’t perfect, but as a sword and sorcery epic, it’s perfect enough.