Review: "Queen of the Damned" is a Mere Curiosity Piece (Remembering Aaliyah) 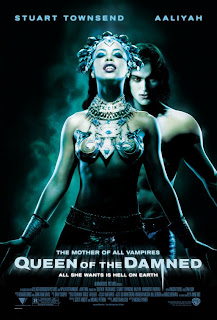 Some may remember the furor and excitement over the unintentionally campy costume drama, quasi horror/fantasy, vampire movie, Interview with a Vampire, based upon the Anne Rice novel of the same title. Released in 1994, it featured Tom Cruise miscast as one half of a vampire duo with Brad Pitt, who wasn’t as miscast, as the other half. At the time, I liked Interview with a Vampire, but I have never been able to watch the film in its entirety since then.

Now comes a sequel of sorts – Queen of the Damned. This 2002 horror film is an adaptation of the third novel in author Anne Rice’s The Vampire Chronicles, The Queen of the Damned, with some plot elements from the second book in the series, The Vampire Lestat. While the first film had its controversy, Queen of the Damned is mostly remembered because it is the last screen appearance of R&B singer and actress, Aaliyah Dana Haughton, best known simply as Aaliyah.

In this film, sexy Stuart Townsend replaces Cruise as the vampire Lestat. Queen of the Damned also depicts Lestat’s rebirth as a vampire (which had been hinted at in the first film) at the hands of a noble dilettante vampire named Marius (Vincent Perez). Marius also possesses the (un)earthly remains of the King and Queen of Vampires (they’re frozen like alabaster statues). Lestat arouses the Queen, Akasha (Aaliyah), from her slumber and that panics Marius. The nobleman takes the remains before Akasha is fully revived and disappears, leaving Lestat alone. This is told in flashback.

The film really begins centuries later, as the sounds of rock music awaken the despondent Lestat, who eventually joins a band of Goth rockers. Still feeling very lonely, Lestat deliberately commits one of the greatest sins a vampire can commit against his kind; he goes public with his vampirism. Marius, who had been secretly following Lestat since he’d abandoned his apprentice, reappears to warn his “child.” However, Lestat’s rock star fame has earned him a death sentence from several vampires who want to destroy him for going public. Worst of all, Akasha finally awakens completely. She has her eyes on Lestat as her royal consort, but she also wants to destroy humanity again, as she did during her first reign.

Queen of the Damned is an occasionally delightful horror film with a heavy fantasy atmosphere, but it also has an equally heavy campy atmosphere. Still, I found it to be an oddly fascinating monster movie. The script is weak, and all the characters are little more than fancy and stylish ciphers. Like its predecessor, Interview with a Vampire, Queen of the Damned manages to have a peculiar kind realism or verisimilitude, as if the world of this movie could actually exist. Director Michael Rymer does a good job grounding this film in reality, which it makes the film’s more fantastic elements really stand out.

A really nice extra from this film is that Jonathan Davis, leader singer of the rock band Korn, and film composer Richard Gibbs provide some nice music and songs for Lestat’s rock band. Davis even sings the songs in the film, but contractual difficulties forced others to sing the songs for the film’s soundtrack CD release. The music adds a nice touch to this campy movie, which is worth seeing when you’re hungry for trash and laughs. I’ll remember Queen of the Damned for Aaliyah, the singer who became an actress with potential. Her beauty radiates in this film, and that makes me think more of it than I would without her.