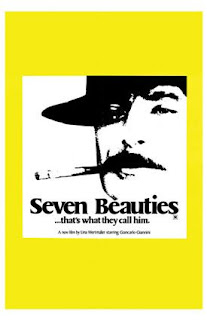 In Pasqualino Settebellezze or (by its English title) Seven Beauties, Pasqualino Frafusco (Giancarlo Giannini) is a small time crook and hood wannabe who lives in Naples with his mother and seven sisters. As the movie begins, Pasqualino and a fellow soldier (Piero Di Iorio) are lost behind enemy lines, somewhere in Germany, during World War II. German soldiers eventually capture the duo, and they are interned in some kind of prisoner camp (which may also double as a concentration camp for Jews).

Because he has by his own estimation always been a ladies man, Pasqualino decides on a plan to woo an evil female German commandant (Shirley Stoler) in an attempt to save his life, a plan that of course goes horribly awry. Pasqualino’s camp trials are interspersed with scenes from his life in Naples and the time he spent in a mental institution for killing a man who he believed had insulted him and his family by turning one of Pasqualino’s sisters into a prostitute.

Seven Beauties earned Lina Wertmüller the first Oscar® nomination for a woman as Best Director. The film is part satirical and part farce, and it’s also a tragicomic drama that focuses on the soul of a common man. Giannini also earned a Best Actor nomination for his performance as a man who sells his body to the Germans and ends up loosing his soul or, at the very least, his spirit to them. Giannini’s performance is one of the great comic masterpieces, but many people may miss this because of the film’s darker tones. Pasqualino is a womanizing clown who thinks he has the world by the balls until the horrors of war and the internment camp show him how brutal people can be to one another. He thought he knew, but his imprisonments really show him how ugly dog eat dog can be.

Seven Beauties might be one of the best films about internment camps, except for the fact that it’s not really about that. Still, the film makes a salient point about the evil, greediness, and selfishness at the core of the human soul. If the film has a fault (and it’s a minor one), it’s that Wertmüller’s script glosses over the impact of Pasqualino’s mother and sisters on him and his character. Otherwise, this is an example of the great cinema Italy has given the world.

Posted by Leroy Douresseaux at 9:26 AM