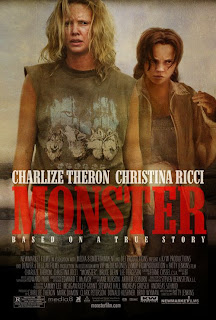 DRAMA/ROMANCE/CRIME with elements of a thriller

Charlize Theron won the “Best Actress in a Leading Role” Oscar® for her performance in the film, Monster. Directed by indie filmmaker Petty Jenkins, Monster is a biopic about Aileen Carol Wuornos (Charlize Theron), a highway prostitute whom the state of Florida executed in 2002 for murdering several men.

An abused child who had become a prostitute and pregnant by the time she was 13, Wuornos left her home in Michigan and moved to Florida where she continued to hook, servicing mainly truck drivers. After being beaten and raped by a client, she goes on a killing spree, killing any “John” she believed would rape her. The film focuses on the nine-month period from 1989 to 1990 when Aileen began murdering her clientele and also began a disturbing and peculiar romance with a woman named Shelby (Christina Ricci), a closet lesbian from a strict, religious family.

The film is brutal and unflinching, and ultimately hard to watch. It has very little entertainment value, similar to a film like Nil by Mouth, but not as bad as Oprah Winfrey’s Beloved. It’s great filmmaking, but ultimately “too real.” Tragic stories are fine, but such tales, that are too much like an exact copy of something from everyday life, are unpleasing. In the end, that’s what keeps Monster from being one of those “best ever” films.

One reason to definitely not miss this film is Ms. Theron’s virtuoso performance as Aileen. It’s one of the best film performances I’ve ever seen; in fact, I’d have to go back to Meryl Streep in Sophie’s Choice to find something so complex, so layered, so deep. Ms. Theron literally becomes someone else, totally alien to her public persona and prior performances. As good as Ms. Ricci is, Ms. Theron (an actress in whom I had very little interest) is a supernova, and though Monster isn’t one of the greatest, her performance is.