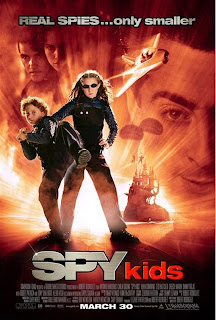 Robert Rodriguez is a low-budget filmmaker even when he gets a big budget to make a film. His breakthrough work, El Mariachi, was an effort of gathering money from wherever he could, including selling his body for medical experiments. Even as his budgets grew larger, his films still had a low cost, B-movie feel to them including such entertaining movies as From Dusk Till Dawn (which was actually a low-budget film) and The Faculty. When he turned his eye towards making a kid-friendly film, he retained his charming visual style, and used a bigger budget to create imaginative and novel backdrops and characters – all of which are seen in Spy Kids.

In Spy Kids, Gregorio and Ingrid Cortez (Antonio Banderas and Carla Gugino) are retired spies with two precocious children, Carmen (Alexa Vega) and Juni (Daryl Sabara), but Gregorio has a secret. He’s still doing spy work, and a project he worked on, named the Third Brain, is the object of desire of a bad spy, Mr. Lisp (Robert Patrick). When Lisp and his cohorts capture Gregorio and Ingrid, their spunky, resourceful children, Carmen and Juni, decides that it’s up to them to find their parents and save the world from the threat of Lisp and his band of nefarious Spy Kids.

Spy Kids has a lot in it that’s worth liking. For one thing, it’s a decidedly low-wattage action movie, which is perfect for children. It lacks the violence and intensity of many action films, but it retains the spirit of action flicks with a sense of adventure and lots of high tech gadgets and vehicles. The cast of villains is a collection of oddballs, seemingly more inspired by Tim Burton films than James Cameron films. Rodriguez fills his Spy Kids with imaginative sets and creatures that seemingly come right out of a children’s fairytale book or a comic book. It all looks so unusual in the context of an action movie, but that’s what makes Spy Kids really unique.

The acting is mostly pretty good. While Banderas and Ms. Gugino are kind of wooden as the parents, young Alexa Vega and Daryl Sabara get better as the film goes along. They manage to be both serious and have a sense of fun about their work. They’re having a good time, and they manage to establish a sly, sort of winking relationship with the audience; they definitely make this picture. The cast of villains is very good, including a surprising turn by Alan Cumming as Fegan Floop, the host of Juni’s favorite TV program; he really buries himself in the character and seems inseparable from the role while on screen.

Although Rodriguez’s script belabors the point about the need for family members to have each other’s back, the film is a fine example of an action film that everyone in the family can enjoy. The plot and story are simplistic, but not simple-minded, and Spy Kids has all the things that make “real” action movies exciting – thrills, gadgets, and a sense of urgency to save the good from the bad.