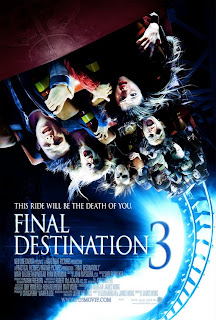 Wendy Christensen (Mary Elizabeth Winstead), a high school senior, fails to stop an ill-fated roller coaster ride after she has a vision of dying a gruesome death with her friends when the ride goes awry. Some people remain on the coaster, and a mechanical disaster does indeed cause the death of several of Wendy’s friends, including her boyfriend. However, it’s soon clear to her and Kevin Fischer (Ryan Merriman), another survivor, that they were supposed to be killed in the coaster accident. Now, Death is revisiting the survivors and picking them off one by one in a series of grisly accidents.

When I saw the teaser poster for Final Destination 3 in a movie theatre lobby late last year, I was ecstatic. I’d hoped that they’d make a third film in this franchise; in fact, after seeing Final Destination 2, I was sure that New Line Cinema would make another one. Still, as time passed, I forgot about it. Now, that I’ve finally seen the third film, I wish that it were a little better, and I wish they’d put more effort into making it more than just a stiff installment in a popular horror franchise.

Final Destination 3 certainly has its moments. The opening roller coaster sequence and the lead into it are an absolute blast, the kind of the thrill ride the first film offered. Throughout this picture film, the atmosphere is perfectly chilly and filled with a sense of impending doom and creeping dread. Still, it all feels clunky, and not having much of a plot doesn’t help. The gruesome deaths feel contrived; of course, they are, as this is a work of fiction. Still, it shouldn’t seem so obviously overdone, gruesome just for the sake of being a hard R-rated horror flick.

The first film was a cool, teen horror movie with a good-looking young cast. The second film was a grisly delight stuffed to the gills with novel ways for the characters to die painful accidental deaths, and it was darkly comic with a sense of gallows humor surpassing its pedigree. This one is more mechanical than macabre, and only a few of the ghastly deaths really hit home. Some will make you cringe in genuine horror; others will make you cringe in embarrassment for the filmmakers.

As horror movies go, Final Destination 3 is not so much cinematic as it is DVD. Even horror fans who consider horror movies a must-see will find that in the case of this scary movie, they can wait.

Posted by Leroy Douresseaux at 10:33 AM