Johnny Depp Bringing "The Vault" to the Big Screen 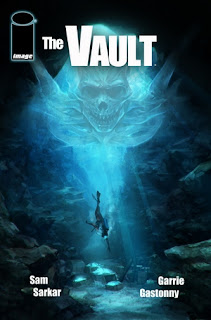 JOHNNY DEPP AND GRAHAM KING TO ADAPT THE VAULT

Sam Sarkar is proud to announce that his latest title, THE VAULT, is being adapted for film by Graham King’s GK Films and Johnny Depp’s Infinitum Nihil. Based on the comic miniseries created and written by Sarkar (Caliber: First Canon of Justice), illustrated by Garrie Gastonny (Senior artist at Imaginary Friends Studios, Warren Ellis’ Supergod) and edited by Dave Elliott (current Editor-in-Chief of Benaroya Publishing), THE VAULT will be produced by Johnny Depp, along with Infinitum Nihil’s president, Christi Dembrowski, as well as Graham King and Tim Headington from GK Films. Sam Sarkar is repped by Jon Levin at CAA and Nicole Romano and David Schiff of The Schiff Company.

THE VAULT is about a small team of treasure hunters, struggling to excavate a dangerous and legendary treasure pit before a massive storm hits Sable Island, the "Graveyard of the North Atlantic." Equipped with all the latest technology, the scientists believe they are prepared against all of nature's fury, but nothing can prepare them for what they are about to unleash.

“So thankful and happy to have the support of Johnny, Christi, Graham, Tim and Denis in bringing the movie of the Vault to life.” States Sarkar. “Lots more surprises to come!”

THE VAULT is a 3-issue miniseries published by Image Comics, with issues #1-3 available to order through Diamond Comic Distributors (http://www.diamondcomics.com/).


ABOUT GK FILMS
Academy Award winning producer Graham King launched his independent production company, GK Films, in May 2007 with business partner Tim Headington. GK Films is determined to leave its mark on the independent film world, acting not only as a production company, but also with premium marketing, publicity, business affairs and International sales divisions. Under King's previous banner, Initial Entertainment Group, he produced such critically and commercially successful films as Gangs of New York, The Aviator, Ali, Traffic and The Departed. In total, his films have been nominated for 41 Academy Awards, 27 Golden Globes and 35 British Academy Awards, and have made over $1.5 billion at the worldwide box office. For more information, visit www.gk-films.com

ABOUT INFINITUM NIHIL
Johnny Depp and Christi Dembrowski, whose Infinitum Nihil has a production deal with GK Films, have been busy: The Rum Diary, which was written and directed by Bruce Robinson and stars Depp, will be released by FilmDistrict on October 28, 2011; the Martin Scorsese-directed 3D Hugo Cabret will be released Nov. 23, 2011 by Paramount Pictures; and they are now shooting the TV series transfer, Dark Shadows, at Warner Bros, with Depp starring and Tim Burton directing. Both Dark Shadows and The Night Stalker were based on series produced by the late Dan Curtis.

ABOUT SAM SARKAR
Born in Halifax, Nova Scotia, Sam Sarkar is a 23-year veteran of the entertainment industry. He began his career as an actor and was one of the leads on the long-running, syndicated television series Neon Rider. Following the series, Sam decided to pursue writing and worked for the hit television series Beverly Hills 90210. Stemming from his work on the show, he also co-wrote a television pilot for Spelling Entertainment under the direct guidance of TV legend Aaron Spelling. Deciding then to embark on feature films, Sam took some chances, following a varied path of writing screenplays and working as a sound technician. In 2004, after working on several films with actor Johnny Depp, Sam was asked to help run Depp's production company, Infinitum Nihil, headed by Christi Dembrowski. As Senior VP at the company, he continues to serve the varied needs of Hollywood as an executive, producer and writer.

ABOUT GARRIE GASTONNY
Having worked as a comic book artist and illustration lecturer, Garrie Gastonny now mainly focuses on illustration to avoid getting beaten up. Garrie also serves as Senior Artist at Imaginary Friends Studios. His credits include Warren Ellis' Supergod, Caliber: First Canon of Justice and Lady Death. For more information about the artist, please visit http://thegerjoos.deviantart.com/.