Review: "Junebug" is a Jewel on an Indie Film (Happy B'day, Amy Adams) 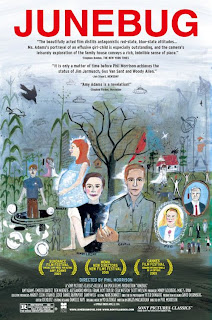 Madeleine (Embeth Davidtz), a Chicago art dealer who specializes in “outsider art,” takes a trip to rural North Carolina with her husband, George (Alessandro Nivola), to convince David Wark (Frank Hoyt Taylor, whose small part is the film’s most memorable), a highly-eccentric folk artist to allow her gallery to show his art. George is not only from North Carolina, but his family lives not too far from Wark’s home.

Madeleine convinces George to finally allow her to meet his small-town family: his bristly mother, Peg (Celia Weston); his reserved father, Eugene (Scott Wilson); his crabby brother, Johnny (Ben McKenzie); and Johnny’s pregnant wife, the sweet and naïve Ashley (Amy Adams). Madeleine has a hard time fitting in, and Peg doesn’t try very hard to hide her dislike or suspicion of Madeleine. Johnny holds grudges against George and is taciturn with Madeleine. To make matters worse, George spends much of the day away from Madeleine, visiting his old haunts and friends, and he begins to revert to his hymn-singing, church-going ways – somewhat to the detriment of his marriage.

Junebug isn’t a great film (it misses that by a lot), but it’s quite good, mostly because of the efforts of director, Phil Morrison. Writer Angus MacLachlan gives us four familiar characters as George’s family, the bitter brother Johnny and the prickly mother Peg being the worse. It’s not so much that they’re stereotypes; it’s what MacLachlan does with them that makes them come across as old hat. Other than in Madeleine, there is no variety in the behavior of the characters. For the most part, they’re stuck in the mud and boring. Every time that there is some glimmer of hope that some breakthrough of depth is about to occur, it turns out to be nothing – stuck in “park.” Poor Celia Weston is like a record that skips, but the script doesn’t give her room to actually perform.

Junebug has three people that make it standout: the aforementioned director and also actresses Embeth Davidtz and Amy Adams. Adams gives one of those splashy performances as a peculiar or unconventional character in Ashley that gets the notice of the critics, and several critics associations and festival awards did indeed honor her for her performance. Ashley is likeable in her frantic need to be liked and in her poor desperation to get husband Johnny’s attention. When Ashley tries to create a bond with Madeleine, Adams makes it feel so real, not phony and desperate, although it initially comes across that way.

However, Junebug is really Madeleine’s story, and if awards must be given for acting in this film, they should have gone to Embeth Davidtz, or at least she should have shared in the glory. As Madeleine, Davidtz (who played a suffering Jewish servant in Schlindler’s List), embodies the film’s themes of family ties and outsiders. Davidtz’s character has to perform the balancing act of dealing with becoming a part of George’s family and dealing with the fact that George is a part of a family outside of her. It’s a culture and a lifestyle that is alien to her. In doing that Embeth gives a warm and poignant performance that guides the viewer through Junebug.

Director Phil Morrison makes Junebug such a compelling film. It’s as if he insisted that the camera drink and drink deeply of the narrative’s setting, as much as it does of the central players. He creates a film the resonates of family, but set in a world that is authentic. It’s not like every small town, but it sure seems like a genuine one. I didn’t like how Morrison has the night scenes that occur inside the house filmed with so little light, but I guess there was a reason for that. We’ll never really know George’s family, but Morrison certainly makes them compelling. Morrison realizes that for the most part, we’re like Madeleine, or at least we’re going to see this world through her eyes. As curious as we are about them, Morrison understands that like Madeleine, as much as we like meeting the kinfolk – those by blood or by marriage, we’re always ready to go home. With Embeth and Amy’s performances, Morrison’s understanding of outsiders and strangers makes Junebug a jewel of an independent film.