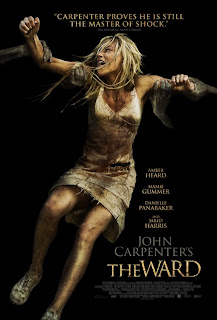 The Ward is a horror movie that debuted at the 2010 Toronto International Film Festival. After that debut, the movie played internationally and received a limited release in the United States this year, before being recently released on DVD. The Ward is also the first full-length feature film directed by famed horror moviemaker John Carpenter since 2001’s Ghosts of Mars. The Ward focuses on a young woman held in a mental institution that is haunted by a murderous ghost.

The story opens in 1966 as Kristen (Amber Heard) sets fire to an abandoned farmhouse. The next day she is taken to the North Bend Psychiatric Hospital in North Bend, Oregon. She is placed in “the Ward,” with several other young women: Iris (Lyndsy Fonseca), Sarah (Danielle Panabaker), Emily (Mamie Gummer), and Zoey (Laura-Leigh). These other patients mostly avoid her, and after the first night, Kristen suspects that there is something really wrong with this hospital.

Kristen soon meets her psychiatrist, Dr. Stringer (Jared Harris), who also cares for the other girls. She does not find him helpful, although he seems insistent and sincere about helping her. Kristen soon discovers that the staff members are the least of her problems. North Bend is being terrorized by a vengeful ghost, and it is determined to kill all the girls before they get a chance to leave the Ward.

I didn’t find anything in John Carpenter’s The Ward that made me think, “Oh, this is a John Carpenter movie!” other than having Carpenter’s name in the credits. This is an average ghost story and psychological thriller that just about any credible director with professional credits behind his name could have made. The script is not exactly pedestrian, but it mines very familiar territory and is simply reflective of a disappointing production: plodding pace, mildly-interesting characters, and a not exactly memorable killer/ghost.

The great thing about this movie is Amber Heard. She is gorgeous even when her character is dressed in hospital garb and looks beat up. Heard gives a passionate performance that brings energy to this sometimes stiff flick. The Ward does have its moments: in particular, Kristen’s first night at North Bend and the movie’s the last act. The setting is also quite good. If you’ve ever had an extended stay at or visited a mental hospital often, you will recognize the stone-faced orderlies; the pill-peddling, taciturn nurses with their crocodile smiles; and the cagey doctors with their inscrutable statements. That’s enough to send a chill up your spine. Mark Kilian’s musical score also does a lot of the heavy lifting in creating a proper scary movie atmosphere for this movie.

I waited a long time for The Ward, and while it isn’t a bad movie, it just doesn’t seem like a real John Carpenter movie.