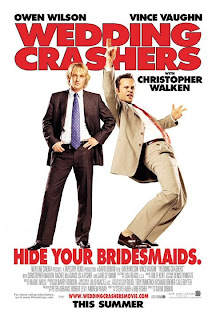 Flowing with raunchy and rich language, Wedding Crashers is hilarious counter programming in a Summer 2005 movie season filled with superhero, sci-fi, and horror special effects-flick madness. Vince Vaughn, who once upon a time Hollywood seemed to be grooming to play the leading man, has turned out to be a mad comic actor; he alternates his slacker-wiseguy between being sometimes overbearing and sometimes playing the big, old teddy bear, and we get a little of both here. Owen Wilson’s cool, slow burning, man of bliss doesn’t wear thin, even in bad movies, and Wedding Crashers is by no means bad. The reason is simple: Wilson and Vaughn fit together like a classic comedy duo, playing the best insincerity since Bill Murray and Chevy Chase charmed their way through adversaries, hapless partners, and beautiful gals back in the 70’s and 80’s.

John Beckwith (Owen Wilson) and Jeremy Klein (Vince Vaughn) are divorce mediators who spend a few weekends out of the year crashing weddings. At these weddings, they’re always on the lookout for Ms. Right, but only to bed her for the night before disappearing back to their straight lives. John convinces Jeremy to take on their biggest crash, the social event of the year, the wedding of the daughter of the U.S. Secretary of the Treasury, William Cleary (Christopher Walken), where they’ll pretend to be somewhat distant relatives of the family, the Ryan brothers, venture capitalists. There, John falls in love at first sight with Cleary’s already-engaged daughter, Claire (Rachel McAdams). The duo gets roped into spending a weekend at the Cleary family’s palatial waterfront estate, but soon find themselves over their heads. Jeremy has caught the eye of Claire’s loopy, sex-crazed sister, Gloria (Isla Fisher), and Owen has to compete with Claire’s rich, jerk fiancé, Sack (Bradley Cooper), who is determined to discover the “Ryan boys” real identities.

Wedding Crashers is both witty and fearless when it comes to taking on the idea of marriage. It’s not exactly cynical, but it’s far from treating marriage and family with reverence. Still, like Old School did a little more than two years ago, Wedding Crashers goes all mushy in the third act as Jeremy gets serious for the first time about a real and deep relationship and John pouts over true love lost. Wedding Crasher’s turn towards the profound doesn’t ring hollow like Old School’s did. The film seems to suggest in a natural and unforced fashion that the boys can’t keep up the ultra-immature routine for the rest of their lives; they must eventually become mature men. They’re too old to act so adolescent and unripe and so callously towards people for their own gratification – certainly not at an occasion where families come together for an event that (usually) unites two families and promises to enlarge them both and continue their lines into the future.

Besides Wilson and Vaughn, most of the rest of the cast is D.O.A. Bradley Cooper does a good turn as the “villain,” and his character begs the audience to know him more, but he’s ultimately tossed aside for the happy ending. Ron Canada as the butler, Randolph, and Ellen Albertini Dow as the harshly frank Grandma Mary are also shortchanged, which ultimately shortchanges the audience. There is a sorry streak in this film’s script that keeps the other madcap characters muzzled because the film must in due course affirm American family’s values. There’s nothing wrong with that, but it is OK for our entertainment and art to tear at our institutions as often as they enforce them.

Not that Wedding Crashers doesn’t remain a bit unhinged even to the end – Will Ferrell’s cameo appearance in the last act allows the film to retain a nice big chunk of its pitiless nature. That makes this flick more than just a guilty pleasure, it is knock down, sidesplitting, riotous, totally freaking funny movie.