"Conan the Destroyer" Goes on an Adventure 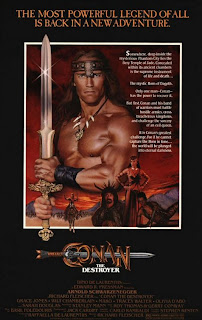 Queen Taramis (Sarah Douglas) makes a deal with Conan (Arnold Schwarzenegger), the Cimmerian who is barbarian, warrior, and thief: accompany her niece, Princess Jehnna (Olivia d’Abo) and her bodyguard Bombatta (the late Wilt Chamberlain, in his first and only film role) to find a precious jewel and key, which they will bring back to Taramis’ kingdom. For that, Taramis says she will revive Conan’s lover, Valeria (who was killed in the film Conan the Barbarian).

Grieving and still madly in love with Valeria, Conan agrees and leads a ragtag group of adventures that includes his fellow thief, Malak (Tracey Walter), Akiro “The Wizard” (played by the actor, Mako, Akiro also appeared in the first film), and a wild warrior woman, Zula (Grace Jones), who escort Jehnna and Bombatta on a quest of find the princess’ treasure. Meanwhile, Queen Taramis secretly plots against Conan and Jehnna, as part of a larger plan to awaken Dagoth the Sleeping God, who currently resides in Taramis’ palace as a reclining marble statue.

Conan the Destroyer, is a lot lighter fare than its predecessor, Conan the Barbarian. Gone are macho men filmmakers, co-writer/director John Milius and co-writer, Oliver Stone. They are replaced for the second film by director Richard Fleischer and two comic book writers, Roy Thomas and Gerry Conway, who wrote the treatment for this film, which screenwriter Stanley Mann apparently changed quite a bit. Fleischer, well known for directing such family-friend fantasy films as Walt Disney’s 20000 Leagues Under the Sea, Fantastic Voyage, and Doctor Doolittle, gives Conan the Destroyer a lighter tone than the first film. It’s silly, but fun – almost cartoonish.

Even in a flick with a lighter tone, Arnold Schwarzenegger is still imposing and fun as Conan. Grace Jones and Tracey Walter’s characters are excellent comic relief (and have some decent screen chemistry between the two of them). The villains are straight out of fantasy pulp fiction and B-movies. Basil Poledouris returns to score the second film, but much of Destroyer’s score sounds like music from Conan the Barbarian. Although the first film is technically a better film (and more of a guy’s flick), I prefer the fun, adventure fantasy that Conan the Destroyer offers.

Posted by Leroy Douresseaux at 11:48 AM