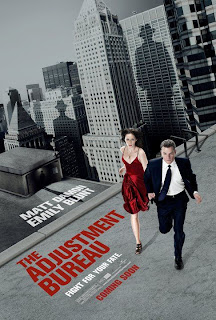 The Adjustment Bureau is a 2011 fantasy drama and romantic thriller starring Matt Damon and Emily Blunt. The film is based upon “Adjustment Team,” a short story by Philip K. Dick first published in 1954 (in Orbit Science Fiction magazine). The film tells the story of a romance between a politician and a ballerina imperiled by a group of men determined to keep them apart.

David Norris (Matt Damon) is a rising political star who hits a bump on his road to glory, but this disappointment causes him to meet, Elise Sellas (Emily Blunt), a contemporary ballet dancer. Entranced by her, David is sure that he and Elise were meant to be together. It is then that he meets a group of mysterious men in hats conspiring to keep them apart.

The men work for The Adjustment Bureau, and these agents of Fate want David to quit Elise and accept a predetermined path they have set for him. They are going to do everything in their considerable powers to stop David and Elise from being together. But David is willing to risk everything to be with Elise, and an unusual member of The Adjustment Bureau named Harry Mitchell (Anthony Mackie) may be the only one who can help David determine his own fate.

The Adjustment Bureau has some interesting ideas, being part metaphysical science fiction with religious themes throughout. Philip K. Dick’s original story was a parable about how defenseless and helpless man is when he goes up against the “Grand Design” or fate. The Adjustment Bureau takes that idea and gives it a somewhat Christian spin and pits that age-old battle of man’s free will against the grand design of God, called “The Chairman” in this movie.

For all its philosophical ambitions, The Adjustment Bureau is a film that seems to be going through the motions for much of the movie. The film doesn’t spring to life until the last half hour when the central conflict stops being philosophical and theoretical and becomes actual conflict. In fact, it is that last half hour that takes this film from average to good.

Posted by Leroy Douresseaux at 11:04 AM