"5 Against the House" a Romantic, Comic Crime Drama 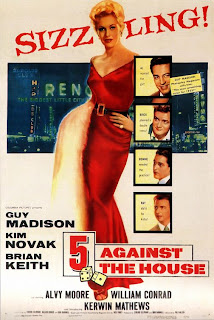 CRIME/DRAMA with elements of romance

Released in 1955, 5 Against the House is one of the first filmed heists and one of the first movies to depict a casino robbery. The film follows four college buddies who decide to rob a casino as a hoax. I am primarily interested in this film for two reasons. 5 Against the House is considered to be “film noir,” of which I am a fan. I am also a fan of the late actor, Alvy Moore, and this movie is one of his first big film roles.

Film noir is the term primarily used to describe a category of Hollywood crime dramas generally (but not exclusively) released in the 1940s and 1950s. I have been interested in film noir (or Film-Noir) for a long time, but it is only in the last decade or so that I have specifically sought out these films. 5 Against the House was released in 2009 as part of a five-DVD box set entitled, Columbia Pictures Film Noir Classics 1.

Jack Alvin “Alvy” Moore was born in December 1921 and died in May 1997. Primarily a light comic actor, Moore made numerous guest appearances on television shows, but he is best known for playing the incompetent county agent, “Hank Kimball,” on the CBS television series, Green Acres (1965-71). Moore served in the United States Marine Corps and saw combat in the Battle of Iwo Jima. He broke into film in the early 1950s and had a small speaking role as one of Marlon Brando’s motorcycle gang in the 1953 film, The Wild Ones. As a supporting actor, 5 Against the House was one his early major roles. At one time, Moore had a small production company and produced the cult science fiction film, A Boy and His Dog (1975), based upon the Harlan Ellison short story.

5 Against the House begins with college pals: Al Mercer (Guy Madison), Brick (Brian Keith), Ronnie (Kerwin Matthews), and Roy Cruikshank (Alvy Moore). The young men are on their way back to college from summer jobs when they take a quick side-trip to Reno, Nevada, where they visit the famous casino, Harold’s Club. While there, Ronnie and Roy get caught up in a robbery attempt. After the culprit is apprehended, the boys overhear someone lament that there is no way a casino robbery can be done.

After they return to their college, Midwestern University, Ronnie, a brainy rich kid, begins to formulate a way to successfully rob Harold’s Club. Al reconnects with his gorgeous girlfriend, Kaye Greylek (Kim Novak), who is now a singer at a local nightclub. Meanwhile, Brick, who served during the Korean War, has a psychotic episode after a fellow student goads him into a fight. Al, who served in Korea with Brick, stops the fight and begs Brick to return to a veteran’s hospital for treatment of his head injury and for post-war mental trauma, which Brick refuses.

Ronnie convinces Brick and Roy to join his plan to rob Harold’s Club after he tells them that it is a hoax and that they will return the money afterwards. They plot to find a way to get Al to participate (with Kaye tagging along), but one of them secretly wants the robbery to be real and has no intention of returning a single dime to Harold’s Club.

I wouldn’t call 5 Against the House a great film, but it is certainly a darn good one. The script, by writers Stirling Silliphant (also a producer), William Bowers, and John Barnwell), efficiently covers a lot of ground in terms of characterization, impressive for a film that barely has over 80 minutes of actual narrative. Viewers will get to know the characters, from Brick’s desperation and psychosis to talkative Roy’s ability to diffuse a situation with one quick quip. Ronnie’s rich boy machinations add nice touches to several scenes.

The combined efforts of director Phil Karlson and director of photography Lester White yield a stylish film that can be tension-filled (casino scenes) and laid back (when the boys are on campus). The opening and closing shots of the gateway to Reno and the romantic scenes featuring Al and Kaye epitomize film noir’s alluring contrast of light and dark.

Some film noir movies have beautiful musical scores, and 5 Against the House has an excellent score from George Duning, which is by turns romantic and suspenseful. Kim Novak shimmers while giving superb singing performances of two songs, "The Life of the Party" (written by Hal Hackady and Billy Mure) and "I Went Out of My Way" (written by Helen Bliss).

I watched 5 Against the House mainly to see Alvy Moore, but I was introduced to a film I can add to my “favorite movies” list.

Posted by Leroy Douresseaux at 11:16 AM