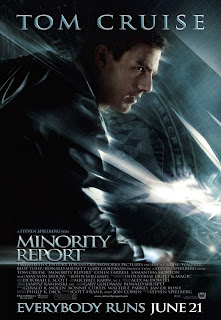 SCI-FI/ACTION/MYSTERY/THRILLER with elements of drama

When I saw director Steven Spielberg’s film, Minority Report, I realized that I was seeing a work by the man who directed Jaws, Close Encounters of the Third Kind, and Raiders of the Lost Ark when he was younger. This film is fun, inventive, and quite exciting, just like the aforementioned. This isn’t the work of the oh-so-serious director of such allegedly adult fare as Schindler’s List and Saving Private Ryan, important films by a grown up director. In fact, Minority Report maintains it exuberance, unlike the fantastic A.I. Artificial Intelligence, which loses steam at the end.

In the year 2050, a Pre-Crime Unit arrests people for murders they will commit, but haven’t yet done so. “Precogs,” humans with the ability to see into the future predict the crime and through a series of high tech machines show it to officers in the Pre-Crime Unit. The officers sweep in and arrest the would-be murderer before he murders. One day, the precogs see a murder committed by the unit’s best officer, John Anderton (Tom Cruise). Determined to prove his innocence, John has to avoid the clutches of his comrades in arms and an ambitious federal agent (Colin Farrell) who are determined to bring him in before he murders his intended victim, a man Anderton doesn’t even know exists.

Visually, Minority Report gives you an eyeful of gadgets and future tech, and a view of a future world. At times, it’s a bit jumbled; some of the ideas about the future seem dead on – rampant, out of control, targeted advertising and public monitoring of civilians; other ideas seem a bit much – the highway system for one. However, when Spielberg puts it all together it makes for a delightful futuristic gumbo of action, thriller, and crime drama.

The script is very good. It’s an engaging story, one of those professional jobs that tie everything together because most of the major film players are related by their fictional pasts. It makes for a good murder mystery, and the execution keeps the mind humming. Although the visuals are sometimes over the top, the story is quite subtle in delivering its philosophical and social viewpoints. It’s smart eye candy.

Watching this film, I get the idea that Spielberg is absorbing some of famed director Stanley Kubrick’s style. The film occasionally has Kubrick’s cool intellectual detachment, which Spielberg showed in A.I., but Spielberg remains true to himself. He knows how to manipulate an audience. He can still control your emotions and keep the heart pumping and the mind attentive. That’s good because it means he still has the magician’s touch he’ll need for the next Indy movie.

I certainly enjoyed Minority Report. It’s an excellent science fiction film, the kind that relates not only to a probably future, but also to how humans might live in that future. And like the best sci-fi, this film makes a subtle connection to our present lives. This is good work, the most thoughtful SF since The Matrix.