Final Destination 5: More of the Same, But with a Twist 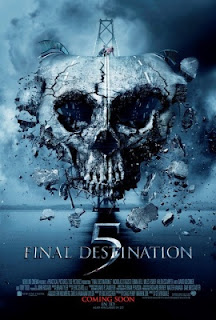 Final Destination 5 is a 2011 supernatural horror film and the fifth movie in the Final Destination film series. This time Death stalks eight co-workers who avoided a grisly demise in a massive suspension-bridge collapse.

Final Destination 5 focuses on Sam Lawton (Nicholas D’Agosto), an office worker and short order cook/budding chef. Sam joins his coworkers as they travel by bus to a company retreat, but early in the trip, Sam discovers that there is a large road construction project underway, which gives him a bad feeling. When the bus comes to a stop on the North Bay Bridge, Sam has a terrifying premonition of a horrible disaster that costs many people their lives.

Sam and, his girlfriend Molly Harper (Emma Bell), and six other colleagues exit the bus and survive the bridge collapse. Later, at a memorial service, William Bludworth (Tony Todd), a local coroner, warns them that by surviving they have messed with Death’s design. Not long afterwards, the survivors start dying one by one in bizarre accidents, and those who remain alive must accept the fact that Death is stalking them. However, Sam and his friends believe that they have found a way to cheat Death, but can they cheat the one who makes all the rules?

Final Destination 5 returns to the darker tone and more character driven story of the original film. As in the first movie, the characters in Final Destination 5 have ambitions, dreams, and goals, as well as personal setbacks, internal conflicts, and relationship problems that will make the audience care about and root for them. In some cases, you may even feel a tinge of regret when some of these characters die gruesome deaths.

In the lead up to some of the deaths, the movie’s pace is painfully slow, as if the director decided to meditate on the last moments of each life about to end in a bloody, ghastly death. I think that just screws up the story’s rhythm and blanches the film’s nicely dark mood. Luckily, the massive suspension bridge disaster that practically opens the film (which is probably the best staged disaster of the entire Final Destination franchise) gives the story enough momentum to carry it through the dry spots. There is also a twist at the end that fans of the series will love.