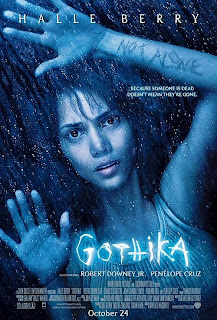 Gothika is a 2003 supernatural thriller and movie vehicle for Halle Berry. It is a ghost story about a female psychiatrist who awakens to fins herself a patient in the very asylum where she works.

Miranda Grey (Halle Berry) is psychiatrist who deals with really crazy people everyday at a prison for the criminally insane. A respected colleague, Dr. Douglas Grey (Charles Dutton), is her husband. One night she leaves work during a driving rainstorm. After taking a detour, a girl suddenly appears on the road ahead of her and forces Miranda to drive her vehicle off the road. When she goes to the girl who obviously seems to be in some kind of distress, something really strange happens. When Miranda awakens, she finds herself locked in the same institution where she worked, and she’s been accused of committing a horribly gruesome crime of which she has no memory.

Quite a few critics have given it bad reviews. One even called it trash – glorious trash, but Gothika is a very entertaining movie. Like a lot of films, it’s really absent of new ideas, and it seems to borrow heavily from What Lies Beneath and The Ring (2002). It is, however, an effective and entertaining horror film and a nicely made thriller. It has some genuinely creepy moments, and at the theatre where I saw it, one girl immediately screamed after a nice “bump in the night” moment.

French director Mathieu Kassovitz is a hot property, and he has the makings of good director, although I don’t see much that would make him stand out from a whole pack of qualified professionals. There are moments in the film, when Kassovitz makes Gothika a bit too mannered and cold. With an asylum for the criminally insane as a setting and a shocking murder upon which the plot turns, Kassovitz needed to make his film get down and dirty. Instead, Gothika is overdressed and over designed, and the cinematography is too slick and glossy.

But you know what? I love watching Halle Berry, and she gets better practically with each film she does. She sells us this film, even when her costar Ms. Cruz seems to be hanging around only to lend her tabloid star presence and her accent. Like the great actresses and stars, Ms. Berry takes us inside the character with her, forcing us to share the extreme terror that comes from loosing one’s memory, place in society, and, most fearsome of all, loosing one’s mind. We can believe that there is a horrible crime hanging over her head, and that she doesn’t remember it and doesn’t want to because it means admitting and learning horrific things. Have fun, and go see this movie.