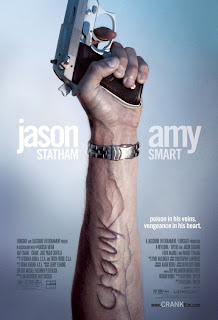 In Crank, an action movie from the team of Mark Neveldine and Brian Taylor, a hit man tears through the streets of Los Angeles to get revenge on the man who fatally poisoned him, and he has to do it before the poison kills him. It’s like Speed, except instead riding a bus, we’re following a man on a mission.

Freelance killer Chev Chelios (Jason Statham) wakes up one morning to find that Ricky Verona (Jose Pablo Cantillo), a petty mob boss wannabe, has fatally poisoned him with something called the “Chinese cocktail,” which is designed to make his heart stop. The poisoning is supposed to be some kind of payback for Chelios’ hit on Chinese crime lord, Don Kim (Keone Young).

The clocks starts ticking when Chelios realizes that to stave off death, he must keep his adrenaline pumping. With no time to waste, Chelios cuts a swatch through Los Angeles, on a rampage for Verona with the hope of getting his revenge before he dies, and he has to tie up his loose ends soon. Verona made it clear to Chelios that he plans of savaging Chev’s girlfriend, Eve (Amy Smart), so Chelios races to save Eve, wreaking havoc on anyone who gets in his way – bystanders, cops, emergency workers, store clerks, etc. His hopes of finding an antidote, if it one really exists, may rest in the hands of a debauched and loony underworld physician named Doc Miles (played with creepy mellowness by Dwight Yoakum).

I don’t know if the writing and directing team of Mark Neveldine & Brian Taylor are great filmmakers, but they’re highly skilled and bursting with enough visual tricks and shorthand that they can certainly make engaging movies. If talent borrows and genius steals, they’re somewhere in the middle. Watching Crank, I recognize the gigantic buffet of camera effects and editing techniques from other movies that the duo used, and I’m overjoyed that Neveldine/Taylor use them well. Crank is at heart like other American action films with their breakneck pace and testosterone, but look carefully a you’ll find a Whitman sampler of exploitation movies, Pacific Rim action films, and stylish British gangster flicks. Neveldine/Taylor cram it all into something that’s like a video game.

For all their visual cleverness and editing dexterity, Neveldine/Taylor benefit from having a truly great action movie star in Jason Statham. His moderate box office success as a leading man in action movies might be reminiscent of the late 80’s to early 90’s career of Steven Segal (or even Jean-Claude Van Damme), but Statham’s badass aura seems genuine. A tough guy with a balding buzz cut, he literally leaks testosterone, and the cameras that film the roughneck B-movie action flicks in which he stars lap it up.

Crank may seem like a completely disposable thriller for those in need of an adrenaline rush, but that’s not exactly entirely the case. Occasionally clumsy, Crank is well staged when it comes to getting the kicks out. What Neveldine/Taylor and Statham (their skills and style; his tough guy-ness) bring to this misbegotten movie-as-videogame is enough to make Crank stand out. You won’t forget this little movie because it’s the asshole that gave you a kick in the teeth when you thought all it was going to be was just another action movie.