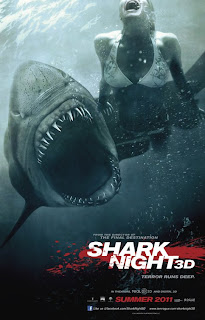 Set in Louisiana, Shark Night 3D is a 2011 3D horror movie directed by David R. Ellis, who directed two films in the Final Destination series. I did not see Shark Night in 3D; although I wanted to, it did not play in a theatre near me. After having seen it, I must admit that I am glad that I did not pay the inflated price for a 3D movie ticket to see it in a theatre.

The film introduces us to seven Tulane University undergraduates: Sara Palski (Sara Paxton), Nick LaDuca (Dustin Milligan), Beth (Katharine McPhee), Blake Hammond (Chris Zylka), Gordon (Joel David Moore), Malik (Sinqua Walls) and his girlfriend, Maya (Alyssa Diaz). They are going to spend the weekend at an island beach house on a private lake near Lake Pontchartrain. Their weekend of debauchery turns sour when one of them loses an arm in a waterskiing accident. When they discover that the accident is really a shark attack, their weekend becomes a hellish nightmare.

If nothing else, director David R. Ellis is a master of gruesome and bloody flesh-ripping death. Final Destination 2 and The Final Destination, Ellis’ two Final Destination films, are the most fun and most ghastly inventive of the lot. Shark Night 3D is similar in style and tone to both of these films, but the story isn’t well-developed nor the script well-written, even for something that is just a youth-oriented horror movie.

Ellis and his cast make this work to the degree that it is merely dumb fun. The young actors in Shark Night turn on the passion and dramatic theatrics, and they give it their all. Watching them, you might even get the idea that some of them are fighting for a part in a “Shakespeare in the park” production. This is not Jaws or even Deep Blue Sea, but it’s thrilling and enjoyable.

Plus, at the end of the credits, we are treated to an excellent and amusing rap music video featuring these young actors, and they are surprisingly good at rapping. Shark Night 3D doesn’t stop trying to entertain.