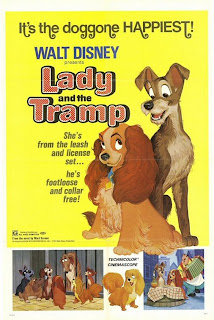 ANIMATION/COMEDY/MUSICAL/ROMANCE with elements of drama

Lady and the Tramp is a 1955 animated romantic film from Walt Disney Pictures. It was the 15th full-length animated feature film from Disney and is based in part on a short story originally published in Cosmopolitan Magazine. The film centers on the growing romantic relationship between two dogs, a female American Cocker Spaniel, who is from an upper middle-class family, and a male mutt who is a stray.

Because of drama and turmoil in her owners’ home, Lady (Barbara Luddy), a pampered and sheltered cocker spaniel, wanders away from the safety of her neighborhood and meets Tramp (Larry Roberts), a jolly, freedom-loving, and streetwise mutt with a heart of gold. They share romantic adventures that occasionally imperil their safety while they move towards an inevitable union. Memorable songs (written by Sonny Burke and Peggy Lee) and memorable characters including the twin Pekingese cats, Si and Am (Peggy Lee), highlight this classic, Disney’s fifteenth animated feature.

Lady and the Tramp remains Walt Disney’s signature romantic animated film; although romance often plays a part in their full-length animated films; this is the Disney animated love story. It exemplifies two particular elements that really stand out in a Disney animated features – the art of beauty and technical skills. The character animation is beautifully drawn making even characters meant to be ugly or villainous quite gorgeous and handsome eye candy. The background art, backdrops, and sets are also elegant, even stunning. The technical virtuosity on display is simply dazzling; this is text book work on animating animals. Characters move with such grace and precision that the film looks, on one hand, like museum quality high art, and, on the other hand, has such striking realism in terms of movement and rhythm.

Lady and the Tramp is probably best known for its romantic heart. A melodic score, charming and adorable songs, and the star-crossed pair of Lady and the Tramp make this an animated film that captures the romantic in the hearts of young and old viewers. That’s why this film is so memorable and also well-remembered by adults who first saw it as a child – a true Disney classic.

Posted by Leroy Douresseaux at 6:54 AM