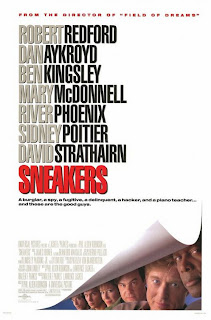 CRIME/COMEDY/THRILLER with elements of action and drama

Computer expert Martin Bishop (Robert Redford) heads a team of renegade hackers: a former CIA employee, Donald Crease (Sidney Poitier); a gadgets wizard who goes by the name "Mother" (Dan Aykroyd); a young genius named Carl Arbegast (River Phoenix); and a blind soundman, Erwin Emory, who goes by the name “Whistler” (David Strathairn); they are “sneakers,” routinely hired to test security systems for places that don’t need to get broken into or hacked into, such as a bank. Bishop’s past comes back to haunt him when two men claiming to represent the NSA (National Security Agency) blackmail him into helping them retrieve a “black box.” Along with his former girlfriend, Liz (Mary McDonnell), Bishop’s team steals the box and discovers that it may be able to break into any computer system in the world. Now, Bishop and his team are caught between dangerous factions who would kill for the box, so they must embark on their most dangerous assignment to date.

A combination caper film, mystery, espionage thriller and comedy, Sneakers featured an all-star cast when it debuted in late summer of 1992. The blend of star names (Robert Redford and Dan Aykroyd), legendary film figures (Redford again and Sidney Poitier), acclaimed character actors (Mary McDonnell and David Strathairn), and a young gun (the late River Phoenix) gave something for everyone in the audience. The subject matter may have been a bit over the head of much of the audience at the time. The home computer had not yet come into widespread use, and hackers remained a fringe news item, as most people yet did not realize the growing part computers were playing in their lives, so they didn’t understand the dangers of hackers who could break the encryption codes of security networks. Also, Sneakers is an action-thriller with no hyper-kinetic action scenes, but the film was a hit. It’s an espionage and (ostensible) spy thriller without that razor’s edge of tension a film such as Patriot Games gives the audience.

For me, Sneakers remains a personal favorite. It’s a brilliant (seriously) caper film that uncannily has the perfect mixture of comedy, action, and suspense with all the ingredients measured correctly to a fraction. No one actor really shines; in fact, Redford’s Bishop is an odd action lead, but somehow this works. Chemistry exists here, although it seems that the cast and characters occasionally rub each other the wrong way.

Something else about the film that always stands out for me is James Horner’s score, with Branford Marsalis on alto saxophone (I think). Horner’s sweet compositions with Marsalis delectable sax playing are perfect for comic caper flick. This was another feather in the hat for a unique and highly imaginative film composer who always seemed to create film music that perfectly captured a movie’s tone. A little more than six years later, Horner would finally win two long-deserved Oscars for writing a theme song and scoring Titanic.

Sneakers is a nice look back at what was then new technologies, and it boggles the mind how that new tech inspired three men to make such a film as this. While Sneakers is more an exercise in the caper/heist genre than it is a treatise on the consequences of certain people having unlimited access to private information and the ability to manipulate that info, Sneakers remains a pleasant little treat for those who want something different in their high tech thrillers.