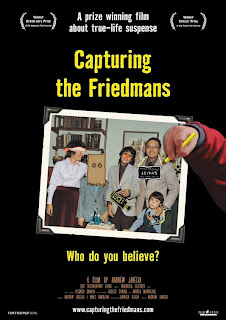 Producers Andrew Jarecki and Mark Smerling earned an Oscar® nomination for “Best Documentaries, Feature” and won several critics “Best Documentary” awards for Jarecki’s directorial effort, Capturing the Friedmans. The controversial film about a controversial child molestation case was arguably, with Errol Morris’ The Fog of War, the best film of 2003.

The Friedmans: the husband Arnold, the wife Elaine, and the three sons David, Seth, and Jesse were a seemingly average upper-middle class Jewish family in Great Neck, New York until disaster struck. Arnold was an award-winning high school teacher in the 1980’s. He taught elementary school children computer classes in his home where his wife operated a toddler childcare group, and that made Arnold Friedman one of the first instructors of computer courses for children that young. However, the U.S. Postal Service began investigating Arnold for possession and dissemination of child pornography. After the local law enforcement became involved, they began an investigation that led to eventual criminal charges against Friedman and his youngest son Jesse for allegedly committing dozens of sexual acts with children during the computer classes. The arrest of Arnold and Jesse and the charges for the horrible crimes destroyed the family.

Although the case became a media sensation in 1987-88 and news organizations saturated the airwaves and newspaper pages with coverage of the investigation and trial, the best footage of what happened to the family was shot by the family members themselves, especially the footage shot by the three brothers. Jarecki composed his film with interviews of many of the event’s participants: the Friedmans, relatives, friends, attorney’s, investigators, and victims and with the footage the brothers shot, footage that was not publicly shown until this film.

Although the film presents compelling evidence that Arnold Friedman was indeed a pedophile, the film makes the argument that what really happened concerning Arnold, Jesse, and the sexual abuse charges during the computer classes may never be known. It also throws a harsh light on the reality that the police investigators (pigs) were overzealous in their investigation and that they may have coerced or encouraged children to declare that Arnold and Jesse molested them. The filmmakers also actually found and recorded on film participants who claimed that they made statements about being abused that weren’t true, as well as participants who refused to cooperate because they did not know of abuse, did not see it, or were not abused.

Beyond the meat and potatoes of the case, Capturing the Friedmans is compelling because the participants and events – both past and present are so intriguing. Fiction writers would kill or sell their souls to get material so good and so damn interesting. I can’t help but be amazed by how frank and honest the Friedmans were in the video footage they shot in the late 80’s. They spoke and acted on videotape as if they never expected anyone to see them being themselves, letting the real Friedmans that are behind closed doors come out. By the end of the film, the Friedmans have revealed themselves to have been a dysfunctional family from the moment the parents married.

Even the present day interviews are as compelling as the old footage. In fact, through present interviews, David, a highly paid party clown in New York, is the best character in the film. He’s so forceful, adamant, angry, and bitter that it borders on being laughable and poignant. You can’t take your eyes away from this film for one moment. Jarecki is a storyteller who makes every moment of his film riveting and a must-see. Would that more fiction films could be like Capturing the Friedmans.