Review: "The Weather Underground" is Interesting, but a Little Dry 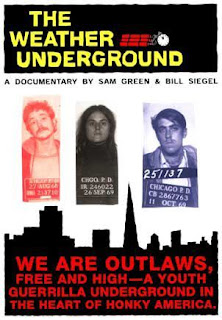 Some people believe that not acting against violence is itself violence, and from this belief sprang the Weathermen. Their group, The Weather Underground, was a radical offshoot of the 1960’s anti-war student group, Students for a Democratic Society. The Weather Underground not only marched in protest, but they also rioted and bombed the offices of government organizations in an attempt to bring about a revolution in America. It was not about changing the American political landscape; it was about destroying it.

The Weather Underground is a 2002 documentary about the rise and fall of The Weathermen. The film earned an Oscar® nomination in the category “Best Documentary, Features” for directors Sam Green and Bill Siegel. The filmmakers interviewed former Weathermen and compiled those interviews with archival film footage of the Vietnam War, news broadcasts, and anti-war demonstrations. They also included readings of Weathermen letters, footage of 60’s and 70’s era interviews of the Weathermen, and photographic images of the original group and related subject matter.

The film is a sobering account of the group and its members, but the Weathermen, at least now, don’t make compelling characters, either in the present or in old film footage of the group. They’re certainly not as intriguing as, say, the subjects in fellow 2004 Oscar® feature documentary nominee, Capturing the Friedmans. The Weathermen (and Weatherwomen) actually don’t go into the kind of detail that would have really brought their story to life and given the film more life, likely because some of what they might say about their activities could still be used against them in a court of law. They are understandable secretive, but no matter how coy they may be, their hints aren’t really enough to pique interest in their former activities, and even less in what they’re now doing.

In fact, the most interesting things in this film are the accounts of the Vietnam conflict and The Weather Undergrounds quasi-spiritual and philosophical connection to The Black Panthers. When the film deals with the destruction of lives on both sides of the Vietnam conflict and the FBI’s murderous war against the Panthers, that’s when The Weather Underground is most passionate, a fatal flaw in the film, actually. Every time the filmmakers and editors move from the war and the Panthers to the privileged middle class whites who made up The Weather Underground, I found myself eagerly anticipating when the filmmakers would return to the war and the Panthers. Those parts of the film are great. Of course, the Weathermen’s story is very interesting, but it is ultimately told a little too dryly here for this documentary’s own good.