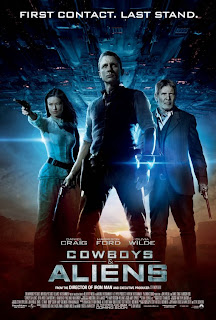 Cowboys & Aliens is a 2011 Western and science fiction movie. This alien invasion film is based upon a concept created by former comic book publisher, Scott Mitchell Rosenberg, who also turned it into a graphic novel. Cowboys & Aliens is set in the Old West and pits a group of cowboys and Apaches against invading aliens. Steven Spielberg is also one of this film’s executive producers.

The story is set in the Arizona Territory, 1873. A man wakes up and discovers that he is injured and also cannot remember who he is. He stumbles into the hard desert town of Absolution, where he learns that he is Jake Lonergan (Daniel Craig), a wanted outlaw. He meets Ella Swenson (Olivia Wilde), a mysterious woman who acts as if she knows Lonergan. Also coming to town is Colonel Woodrow Dolarhyde (Harrison Ford). Apparently, Lonergan stole a large cachet of gold from Dolarhyde.

Lonergan’s punishment will have to wait, however; alien aircraft attack Absolution and abduct several citizens. Dolarhyde leads a posse into the desert to track the ships, and Lonergan only reluctantly goes along. He is somehow connected to the aliens; so says the strange metal band around Lonergan’s left wrist.

Movies that blend the Western genre with science fiction, fantasy, or horror are box office and/or critical disappointments. The two best examples are the science fiction/Western, adaptation of an old TV show, Wild Wild West (1999) and the horror/Western, comic book adaptation Jonah Hex (2010). Cowboys & Aliens is not so much a sci-fi Western as it is an alien invasion movie set in the Old West. The film never pretends to be a Western. Cowboys & Aliens is about a group of people who live in a time different from our own fighting invaders the way Attack the Block is about people in a place different from what many of us know who are fighting invaders.

Like many action movies, I found the first hour of Cowboys & Aliens to be mostly a misfire. By the second half, when the movie focuses on what it is about, the technologically disadvantaged humans versus the technologically very advanced aliens, the story slips into the comfort zone of fights, pursuits, and escapes. And the movie is very entertaining when you just sit back and let the sci-fi stuff thrill you. Yeah, this movie doesn’t require you to do a whole lot of thinking.

The performances are pretty good. Cowboys & Aliens affirms once again that Daniel Craig is a leading man; his interpretation of Jake Lonergan as the man-of-few-words and stoic cowboy makes the character more interesting than the screenplay does. Still, the biggest surprise may be Harrison Ford. Col. Dolarhyde is practically a villain, but there are moments in which Ford subtly uses emotion and Dolarhyde’s prejudices to create a complicated character that engages the imagination.

Cowboys & Aliens is not a classic Western or even a classic science fiction movie. It is an amusing film – at least half of it is.