"Be Cool" Never Heats Up 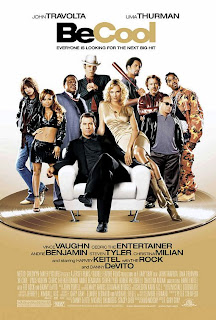 Ten years after Get Shorty, the sequel, Be Cool, shows up at theatres. Both films are based upon novels by Elmore Leonard, whose books have long been a source of film materials for Hollywood. Be Cool is not as witty and as sharp as Get Shorty, but it certainly tries to be the same blunt comic crime caper that the latter was. It has the characters, the cast, and some truly sidesplitting comedy, but ultimately, a faulty script and clunky directing mar a film that was so close to being a really fine crime comedy.

Chili Palmer (John Travolta), the Miami-based shylock who came to Hollywood and charmed and bullied his way into filmmaking, is now tired of the movie business. He’s interested in music, and when Tommy Athens (James Woods), a friend who owns a record label, is murdered by Russian mobsters before Chili’s eyes, that homicide opens the door for him. Chili meets Linda Moon (Christina Milian), a struggling singer stuck with a wannabe Negro named Raji (Vince Vaughn) for a manager. Chili, in his usual way, relieves Raji of Linda’s contract with him, and becomes her new manager.

Chili makes his next connection with Tommy’s widow, Edie Athens (Uma Thurman), who after some convincing is ready to take on Chili and Linda. However, there is the issue of Linda contract with Raji, and Raji’s partner, Nick Carr (Harvey Keitel) who isn’t crazy about letting go off a potential star. Edie also has another big problem: Tommy owed $300,000 to Sin LaSalle (Cedric Entertainer), a very successful, but violently inclined record producer. Raji, Nick, and Sin all see Chili as their problem; as they angle towards him, he’ll try to make Linda a star, woo Edie, and get his way, always dealing with violence and pressure by his motto, be cool.

There are probably a lot more belly laughs in Be Cool than Get Shorty, and that makes it worth seeing. The cast is littered with star turns and novel and hilarious supporting performances, especially Vaughn as Raji and The Rock as his gay, wannabe actor bodyguard, Elliot Wilhelm. Christina Milian holds her own; she works in this movie because her confidence makes her come across as a fine singer and actress, even if there might be stronger singing voices and better young actresses than her.

Travolta reportedly suggested Uma Thurman as his leading lady for Be Cool because they could recapture their screen chemistry from Pulp Fiction, which restarted Travolta’s career and boosted Ms. Thurman’s, but they don’t. Yes, a rapport and friendliness exist between them, but they are sluggish here. Travolta is Chili Palmer, but he’s on automatic here, older and heavier. Even Thurman looks strained, only managing about half the time to have the perkiness, determination, and raw magnetism that show themselves in her collaborations with Quentin Tarantino.

The lion’s share of the blame from this go to writer Paul Steinfeld and director F. Gary Gray. They never seem to be able to integrate the music business element into this plot (after all it’s about Chili getting in the music business), and the film’s musical numbers (except the Aerosmith/Christina Milian performance) and music videos ring hollow. This is a gangster film with laughs, lots of them, but these hilarious and likeable characters don’t seem to be in music because the music industry isn’t in this film the way the movie business was clearly and strongly a part of Get Shorty. Still, Travolta, Ms. Thurman, and a supporting cast of wacky players make this a crime comedy worth seeing, even if you can’t make it to the theatre.