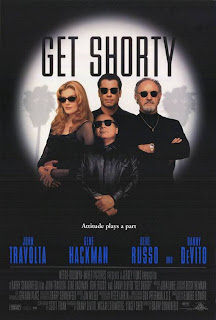 CRIME/COMEDY with elements of drama

Get Shorty is a 1995 crime comedy starring John Travolta. The film is based upon the 1990 novel, Get Shorty, by Elmore Leonard.

Ten years later, Get Shorty, is still as slick and as cool as it was the day it debuted. Although it’s 2005 sequel, Be Cool, is filled with hilarious characters and situations, Get Shorty emphasized polished filmmaking, laid back acting, and subtle comedy to make it more of a humorous comedy than the riotous laugh fest its sequel is. Get Shorty fits right in with several other adult crime films from the mid to late 90’s because it doesn’t pretend to be for everyone, so it didn’t pander to juveniles and those with juvenile mindsets. With an emphasis on sharp writing, adult situations, engaging characters, snappy dialogue, and non-gratuitous violence, these films, which included The Negotiator, Jackie Brown, and Out of Sight, were a welcomed treat for adult viewers.

In Las Vegas to collect a debt for his boss, Ray “Bones” Barboni, Chili Palmer (John Travolta), a cool Miami loan shark/shylock, agrees to collect another bad debt, this one from trash movie producer Harry Zimm (Gene Hackman) in Los Angeles. Zimm gets lucky because Chili is a movie buff and pitches a movie idea to Zimm. They become partners and Chili easily slips into the life of a film producer. He schmoozes stars, gets reservations to all the best restaurants, and romances B-movie scream queen, Karen Flores (Rene Russo). Chili however isn’t the only mobster who wants in on the movie business. Harry Zimm owes another shady lender, Bo Catlett (Delroy Lindo), money, and Catlett wants to force his way in on a deal for a hot script Zimm has. Add Catlett to a mix of angry drug dealers, relentless DEA agents, vain movie star Martin Weir (Danny DeVito), double and triple crossing, and Ray Bones showing up in town looking for him, and Chili will need to use all his wiles to get his way.

In Get Shorty, the cast members use their star power and screen personas to add zest to these characters that were born in the mind of Elmore Leonard, a novelist who creates memorable characters for his numerous novels. Director Barry Sonnenfeld gives the film an easy mood, and allows his cast to give performances that crackle. John Travolta embodies that don’t-give-a-shit attitude of confident thug. Gene Hackman is funny, sly, and adds subtle touches that make Harry Zimm zing.

In the final analysis, the film does come across as too glossy. It rushes to a tacked-on happy ending, and the characters beg to be better known or more developed. It’s because the cast make these stock characters as flavorful as they are in Leonard’s novels (although in smaller servings) that Get Shorty is still such fun to watch.