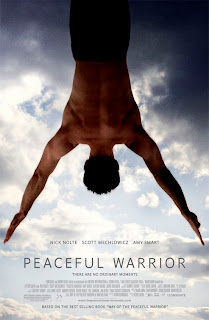 An exceptionally skilled and endowed gymnast, Dan Millman (Scott Mechlowicz) has everything he wants, plus a shot at the Olympics. He meets a mysterious gas station attendant whom he dubs, “Socrates” (Nick Nolte). Socrates tries to show Dan how to reach a greater potential as an athlete, but Dan eventually brushes off Socrates. Later, Dan is in an accident and sustains a horrible injury that could take away his ability to be a gymnast. During his recovery, he turns to Socrates and Joy (Amy Smart), a young woman somehow connected to Socrates, to heal. Socrates unlocks a world of sage wisdom and spiritual understanding that will teach Dan to live in “the now,” and just maybe this journey will bring him back to being a champion gymnast.

Director Victor Salva’s (Powder, the Jeepers Creepers movies) Peaceful Warrior is a lovely inspirational film, and while it doesn’t break any new ground, Salva creates moments in time that transform the film from mere motivational sports movie into a compelling narrative about appreciating the present. Inspired by true events, this spiritually-oriented film is based on the book by the real Dan Millman, who mixed fiction, metaphor, and symbolism with the facts of his life to create an inspirational philosophical story.

In Peaceful Warrior (which was initially released in 2006 and then again in 2007), Salva successfully sells the idea that non-religious spiritual thought and experience are real things and that the two can benefit, comfort, and improve the lives of practitioners. When he convinces the audience to buy into the idea that each moment is important, and the one in which we currently live is not less than the ones that have passed or the ones to come, then, Peaceful Warrior succeeds. Salva also mixes in some excellent scenes of gymnastic events.

Nick Nolte gives a beautiful performance that is so smooth and easy going. Scott Mechlowicz is nearly pitch-perfect as the arrogant, ambitious, and conflicted college athlete. Together they forge the wonderful teacher/student relationship that is the strong and brilliant heart of this film.