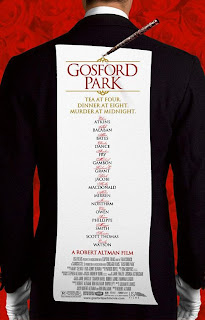 Sir William McCordle (Michael Gambon, The Insider) and Lady Sylvia McCordle (Kristin Scott Thomas) invite many family and friends to their old style, English country estate for a weekend shooting party. Sir William has been the financial benefactor for many of his guests, some needing him more than others and him rejecting the needs of some. When Sir William is discovered dead in his study, everyone: family, guests, and their servants are suspects.

Directed by Robert Altman (The Player, Short Cuts, Nashville), Gosford Park is written in the fashion of an Agatha Christie whodunit, her brand of mystery story that was sometimes set in an old country manor. Altman, a master of the ensemble cast, uses this large cast of British thespians with the flair of a wizard and the skill of great director. Altman creates a pace for Gosford Park that is as still and as measured as a Merchant Ivory production, but underneath the stiff veneer is a film that is as sharp and as full of wit as the best comedies. Every time that Altman seems to start to slip in his craft, he unleashes something that is so rare in films this day: a movie in which the story, setting, and cast are so well played that the audience is knocked off its collective feet. With each marvelous comeback, we believe in him even more. Gosford Park has the kind of execution that brought us to our feet in The Player.

The script by actor Julian Fellowes from an idea by Altman and cast member Bob Balaban is, too say the least, excellent. To use such a large cast in which each and every actors plays what amounts to a major part in the film, even on small screen time, is rarely seen, and is usually reserved for the stage. To write a script that does this in a movie that is barely over two hours long is to understand quality over quantity. There are no big named stars here waiting to chew up scenery and to have their Oscar soliloquies. Fellowes creates a story that has the density and plot lines of a novel, but the brevity of a short story. He does not waste words and scenes, and Altman ably directs the script with the same efficiency. Fellowes wry take on class and social status is uncanny; he sums up British society in the time it would take most writers to begin their introduction to the topic.

Gosford Park is a movie of good performances. Maggie Smith as Constance, Countess of Trentham and Helen Mirren as the housekeeper, Mrs. Wilson earned well-deserved Oscar nominations. Ms. Smith sets the stage and creates the atmosphere for this drama, comedy, and mystery. She embodies British reserve, attitude, and wit, but it is in those moments when she surprises with some unexpected line or sudden glance that she really defines the chameleonic nature of this film. Ms. Mirren well represents the hurt, the lies, and the secrets of Gosford Park; she is want and fulfillment so held in check that when it burst forth, someone must die.

Ryan Phillippe, Stephen Fry, Clive Owen, Ron Webster, Emily Watson, Kelly Macdonald, and Alan Bates among others of this fine cast all do wonderful work. It boggles the mind what these actors do with a great script and one of the great directors.

Gosford Park has as its foundation a well know genre, and it does not refute the trappings of this genre. While a mystery novel must play to its conventions, Gosford Park allows the human dramas to tell the story. Each character’s story and motivation underlies the story, and every character has at least one moment in the spotlight. As motives come forth, the film casts off its whodunit costume and becomes a real drama and witty satire on class. Like life, it is a comedy and mystery, and, like life, the story and its characters remains intriguing even as it ends.

It’s one of those special films that waits for a viewer hungry for some meat to go with the sugary plate most films offer as their sole course.