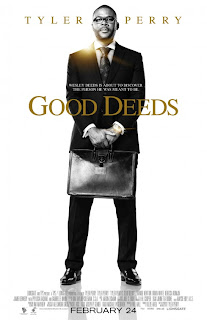 Good Deeds is a 2012 romantic drama from writer/director Tyler Perry. Although Perry is also the film’s lead actor, this isn’t a “Tyler Perry film,” as far as what we generally expect of a Perry film – broad comedies often featuring the character, Mabel “Madea” Simmons, who does not appear in this movie. Good Deeds is about a businessman who leaves his comfort zone to help a struggling single mother.

Wesley Deeds (Tyler Perry) is a San Francisco-based businessman who is CEO of Deeds Corporation, the software company his late father started. He is engaged to marry Natalie (Gabrielle Union), a beautiful young woman who works in real estate, but his mind is always on work. With the assistance of John, (Eddie Cibrian), a company executive, Wesley is currently trying to buy a rival company, but Wesley’s resentful younger brother, Walter Deeds (Brian White), may be trying to sabotage the company. Their mother, Wilimena (Phylicia Rashad), is totally plugged into planning the wedding. Wesley Deeds does what he is supposed to and expected to do.

However, Wesley is jolted out of his scripted life when he meets Lindsey Wakefield (Thandie Newton), a single mother who is a janitor in Wesley’s office building. Lindsey speaks her mind and is fiercely independent, but when she and her daughter, Ariel (Jordenn Thompson), are left homeless, she needs help. A chance encounter brings together two people who are in a really bad place in their lives.

If Wesley Deeds can be said to leave his comfort zone in this story, then, it can be said that Tyler Perry, for the most part, leaves his comfort zone to create Good Deeds. This is an uplifting movie that emphasizes living the life one wants to live (or trying to) by relying on one’s self. In this movie, Perry pushes believing in yourself as a vehicle of change rather than a belief in faith and God as the path to change. Good Deeds is by no means anti-religion, but this is the most secular film Perry has done to date. The religious themes and testifying that are so evident in his broad comedies are absent in this romance and drama.

I was also surprised by how well written the screenplay is, considering (once again) that Perry has left his broad comedy comfort zone. Good Deeds does sometimes come across as an African-American soap opera (especially the elevator scene late in the film). However, this is also a character drama that puts a laser focus on Wesley Deeds and Lindsey Wakefield. Perry really delves into these characters and pulls out their insides so that the audience can see what makes them tick. Perry shows the audience the inner conflicts and struggles as much as he depicts Wesley and Lindsey’s exterior drama.

I think that Thandie Newton is, as usual, very good. She can do trials and tribulations as well as any African-American actress, and better than most. Perry, on the other hand, is mostly hit or miss as Wesley. There are moments in which he just does not seem convincing as an upper class Black man from an old money African-American family with an Ivy League pedigree.

Another of the film’s faults is that it largely ignores some of the other characters that have potential: Walter and Wilimena Deeds and Natalie, in particular. Perry created three good characters in them, but gave them small spaces to shine except in moments that seem like little more than stereotypical melodrama. Young Jordenn Thompson as Lindsey’s daughter, Ariel, also steals a few scenes.

Still, Good Deeds is really about Wesley and Lindsey, and to that end, the film is a pleasant drama that has a few riveting moments. These moments can jerk some tears from the audience, and that’s surprising to me. I didn’t expect even that much from Good Deeds.