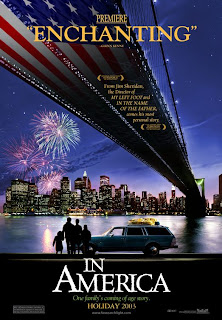 In America is a 2003 semiautobiographical drama from director Jim Sheridan. This Irish/British film tells the story of an immigrant Irish family’s struggle to survive in New York City, with the story told through the eyes of the older daughter. Although gritty and dark, In American is actually an enchanting story about the bonds of family.

An out of work Irish actor takes his family to America for a fresh start. Johnny (Paddy Considine) and his wife Sarah (Samantha Morton, who received an “Best Actress” Oscar® nomination for this role) leave Ireland with their two daughters, Christy (Sarah Bolger) and Ariel (Emma Bolger), in toe and head for New York City via Canada. While Johnny pursues his acting career and Sarah works at an ice cream parlor, the children take in their new world with eyes that may be innocent, but are also world weary. When things seem most down for them, the family gets help from one of Sarah’s co-workers and Mateo (Djimon Hounsou, received an “Best Actor, Supporting Role” Oscar® nomination) an artist dying of AIDS, who brings magic and hope to the family.

Jim Sheridan and his daughters, Naomi and Kirsten, received “Best Screenplay, Screenplay Written Directly for the Screen” Oscar® nominations for writing In America, one of the best films of 2003. While the financial plight and wellness of the parents are riveting (although I found Considine and Ms. Morton’s performances a bit flat at times), the film is the daughters’ story. Christy narrates while Ariel steals one scene after another, and, in doing this, the Bolger girls (especially little Emma) give two of the best performances by young artists in the last year or so.

Although In America is a gritty tale, in a lot of ways it is told as if it came from a children’s book (albeit a dark, downbeat children’s book). Through Christy’s eyes we see the real world, but we see it through a character determined to survive and make the best of things. In Emma, the supernatural, the fantastic, and magic are possible; their presence in the real world isn’t an intrusion. It’s the just the way things are; they belong. I heartily recommend this beautiful and heartfelt drama. In America is a little more magical than it is honest, but to see Jim Sheridan weave loveliness from all this despair and sorrow is itself magic.