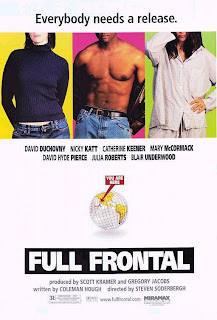 Steven Soderbergh laid down the law to his large cast of stars for his low budget ($2 million) film, Full Frontal, denying them the amenities that movie stars have come to expect on the sets of films in which they appear (star). Apparently, he really wanted the focus to be on actually making a film and less on the celebrity politics of Hollywood filmmaking. Full Frontal is one of those “meta” films like Spike Jonze’s two films, Being John Malkovich and Adaptation, in which there is a film within a film within a film, a story within a story, and a play within a play. All the elements: filmmakers, actors, characters, settings, story and script blend together to create some kind of hyper fictional/documentary movie hybrid.

Full Frontal follows a day in the life of a group of men and women in Hollywood as they approach an evening birthday party for their friend Gus/Bill (David Duchovny). If you’re wondering why Duchovny’s character has two names it’s because this is a movie within a movie, and some of the film’s characters have dual identities: one is a “real person” and the other is a fictional character. If this is confusing, it is because Full Frontal can be very hard to follow, unlike the aforementioned Spike Jonze films which were both written by Charlie Kaufman and which were both very easy to follow.

Julia Roberts and Blair Underwood (an under appreciated and underutilized actor likely because he is Africa-American) play dual parts and it’s a doozy to separate the lives of four characters that are so alike both professionally and personally. The script by Coleman Hough has that thing we all look for in a story that’s supposed to engage us – pathos. It is a fine dramatic presentation of several slices of several lives ably put to words, and Soderbergh expertly captures the sometimes-farcical nature of life and the sometimes quiet, sometimes manic nature of the beast that is romance.

Full Frontal is a movie within a movie and a film about filmmaking for people who really like movies. Yes, it’s sometimes confusing and following it is occasionally arduous, but numerous excellent performances, sharp film editing, and some neat star cameos make it worth the effort. Steven Soderbergh is a gifted, imaginative and inventive director who really loves to play around with the process of making movies, so anything he makes is not just interesting; it’s damn interesting. Plus, Full Frontal is such an absolute pleasure to watch, even if it bends the mind one too many times.