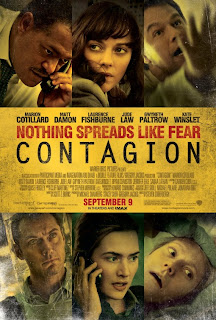 Contagion is a 2011 film from director Steven Soderbergh. Essentially an ensemble drama and thriller, Contagion documents the spread of a virus that turns into a global pandemic, causing worldwide social chaos. Meanwhile, government officials try to contain it and medical officials try to identify the virus in order to create a vaccine for it. Contagion is a smart, scary disaster movie that will simultaneously give you the creeps while making you wonder if you are prepared for a pandemic.

The film begins by focusing on Beth Emhoff (Gwyneth Paltrow), a businesswoman in Hong Kong. Unbeknownst to her, Beth returns to the United States bringing with her a pestilence that will leave half her immediate family dead. From there, the story focuses on countless players dealing with the aftermath of the virus that is eventually named, MEV-1. Beth’s husband, Mitch Emhoff (Matt Damon), balances his need to protect his daughter, Jory (Anna Jacoby-Heron), who is frustrated with the quarantine, with her need to be a teenager. Alan Krumwiede (Jude Law), an Internet blogger who is obsessed with conspiracy theories, schemes to make money off the chaos created by the spread of the virus.

At the Centers for Disease Control and Prevention (CDC) in Atlanta, Dr. Ellis Cheever (Laurence Fishburne) leads a team trying to identify the virus, contain it, and create a vaccine for it. A World Health Organization (WHO) epidemiologist, Dr. Leonora Orantes (Marion Cotillard), travels to Hong Kong to trace the origin of the virus. CDC scientist, Dr. Ally Hextall (Jennifer Ehle), feels the pressure to find a cure, so she makes a decision that is either selfish or selfless. Meanwhile, fear and mass hysteria spread faster than the contagion.

Contagion has no single protagonist and no outright human antagonist. However, because it is an ensemble drama, Contagion can explore multiple themes, such as mass panic, loss of social order, the limitations of government during a disaster, cronyism, and greed, etc., from the view point of multiple characters.

Director Steven Soderbergh has this film jumping from one character and plot to the next. Because the characters are so well-defined and the plots so riveting, he always leaves the viewer wanting more, which can directly engage the viewer with the story, almost as if it were a real event. Contagion’s ultra-realism makes the movie feel more human and less post-human like so many modern, computer effects enhanced film thrillers. Of course, Soderbergh has an excellent multi-layered script by Scott Z. Burns from which to work. This reach and scope of this screenplay practically demands that Burns or someone else turn it into a novel.

Contagion is by no means perfect. It burns so hot, which is why it is so intense as a thriller, but Soderbergh needed to dial that back a few notches in certain parts of the story. Sometimes, the film is too aloof when it needs to stop and focus longer on certain characters in certain scenes.