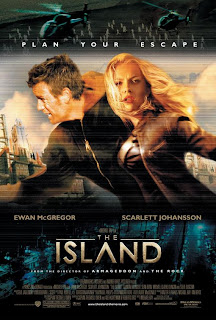 The Island is a 2005 science fiction film and action movie from director Michael Bay. The movie follows the struggles of a young man to fit into the highly regimented world in which he lives. Then, he learns a shocking secret about that world and about himself that sends him on a race to freedom.

In the mid-21st century, Lincoln Six Echo (Ewan McGregor) and Jordan Two-Delta (Scarlett Johansson) are among the hundreds of residents living in a self-contained facility because, they are told, the world outside is contaminated due to an ecological disaster that took the lives of everyone on the planet, leaving the residents (for the most part) the only remaining humans. The facility’s environment is carefully controlled, and everything about Lincoln and Jordan’s day-to-day lives, like that of all the facilities residents, is monitored, seemingly for their own good, by a security staff and a team of doctors and scientists. The only way out for the residents—and the hope they all share—is to be chosen to go to The Island, reportedly the last uncontaminated spot in the world.

Lincoln is restless because of the unexplained nightmares that have recently plagued him, and he increasingly questions the restrictions placed on his life, even sharing his concerns with the head of the facility, Merrick (Sean Bean). For instance, Lincoln wonders why can the residents go to the Island, and the facility’s security and administration can’t. He is, however, unprepared for the truth when his growing curiosity leads to the terrible discovery that everything about his existence is a lie, that The Island is a cruel hoax…and that he, Jordan and everyone they know are actually more valuable dead than alive. With time running out, Lincoln and Jordan make a daring escape to the outside world they’ve never known. However, Merrick cannot afford the truth of his activities to get out. He hires a team of mercenaries, led by Albert Laurent (Djimon Hounsou), to hunt down Lincoln and Jordan – return them or kill them. With the forces of the institute relentlessly pursuing them, Lincoln and Jordan have one overriding concern, to live.

The Island is the latest film from director Michael Bay, who gave us Bad Boys II in 2003, but is best known for such films as The Rock and Armageddon. The Island is divided into two halves making it almost like two films. The first is a futuristic, dystopian tale set in a complex that protects people from the allegedly dead world outside, which is poisonous to humans. The second film (or half) is an action movie, with the usual Bay histrionics; imagine the car and helicopter chases in the Bad Boys franchise, in particular the over-the-top freeway car chase in Bad Boys II. Better yet: if you remember the film, Logan’s Run, or the novel upon which it’s based; then, you may recognize The Island as a kind of action movie/video game remake or re-imagining of Logan’s Run.

The film hardly touches the scientific and philosophical issues it raises (cloning; what does it mean to be human; and freedom) merely as window dressing for a big-budget Hollywood shoot out with the requisite hysterical car chase/car wrecks/automobile destruction scenes. Perhaps, the writers and director don’t have to really dig too deeply; just the idea of cloning and using clones as spare body parts for “regular” humans is creepy and nausea inducing as it is. But wouldn’t it have been nice for the film to make an effort to emphasize ideas over cinema of sensations and thrills? The design of the futuristic Los Angeles cityscape looks as if no one really bothered to put much thought into how L.A. will look in 50 years. Steven Spielberg put way much more effort in imagining the future for Minority Report, and that movie is set in a time much closer to our own than the one in The Island.

Scarlett Johansson is almost dead on arrival – too much like a machine, cold and aloof as if she mistakenly believes that she’s playing a cyborg killer in one of The Terminator movies. Ewan McGregor, on the other hand, is a movie star; he is a good actor, but he’s a great movie actor. The screen loves him, and he always seems to create the perfect film character – except in the Star Wars prequel, where he was just another film element for George Lucas to manipulate; he wasn’t allowed the freedom to build a movie character. Here, he does have the freedom to gradually build Lincoln into the kind of rebellious hero who questions the status quo of the world around him, the kind of hero through which we vicariously live as he fights his way to a satisfactory resolution. Hooray for Ewan; he makes this film. He saves it from Michael Bay’s intentions gone wrong.