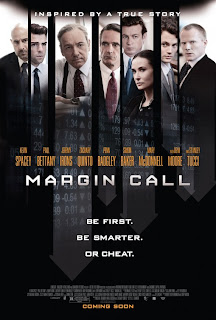 Margin Call is a 2011 ensemble drama written and directed by J.C. Chandor. This independent film takes place over a 36-hour period and is set in an investment firm during the early days of the 2008 financial crisis.

At an unnamed investment firm, a typical morning in 2008 turns atypical with a round of layoffs. One of these fired employees, Eric Dale (Stanley Tucci), passes a USB drive to one of his former subordinates, Peter Sullivan (Zachary Quinto). While perusing the data on the drive, Sullivan makes a shocking discovery, so he alerts the firm’s trading desk bosses, Sam Rogers (Kevin Spacey) and Will Emerson (Paul Bettany). The news goes to more senior executives, including division head, Jared Cohen (Simon Baker), and finally to CEO John Tuld (Jeremy Irons). How they fix this crisis could damage the firm, to say nothing of the damage done to people and entities outside the firm.

Not only is Zachary Quinto a cast member of Margin Call, but his production company, Before the Door Pictures (owned with fellow Margin Call producers, Neal Dodson and Corey Moosa), is also one of the companies behind this film. Because he produced this movie, I think it means that Quinto may have a good sense for quality screenplays. Margin Call is sharply written, and rather than bogging down the audience in the jargon of mortgage back securities and investment trading, the script looks at the characters, personalities, and people behind the decisions that rock the financial foundations of both our nation and also of the entire world.

Writer/director J.C. Chandor has earned an Oscar nomination for this screenplay, but the more impressive feat is directing this cast. There are three Oscar wins between Kevin Spacey and Jeremy Irons and a lot of superb work on the theatre stage. Stanley Tucci has years of excellent performances behind him, and he deserves an Oscar. The rest of the cast is rock solid.

Chandor gives each actor a chance not only to shine as an individual performer, but also to help bring all the performances together to tell a riveting story. Chandor and his cast turn this character drama into a Wall Street thriller. There are some hiccups in the script, and there are also moments when the performances seem like stiff dialogue reading, but they don’t hurt this excellent film. Overall, Margin Call has a better story and screenplay than Oliver Stone’s Wall Street (1987), although Margin Call doesn’t have a monster performance like what Michael Douglas gives Wall Street. Thus far, however, Margin Call is this new century’s signature film about the callous greedy.