"Pride" is Also About Determination 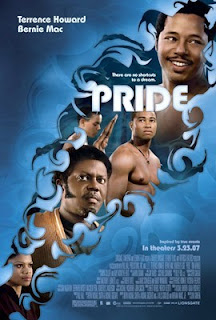 Pride is a 2007 biopic and drama starring Terrence Howard and Bernie Mac. The film is loosely based upon the true story of Philadelphia swim coach, James “Jim” Ellis, who, in 1971, formed the first swim team made of African-American swimmers.

In 1973, Jim Ellis (Terrence Howard), a college educated African-American, arrives in Philadelphia looking for work. He lands a job with the Philadelphia Department of Recreation to begin closing the Marcus Foster Recreational Center. Instead, he refurbishes the rundown center’s abandoned swimming pool, and then, shocks this local inner city community by forming a swim team. With the help of the center’s janitor, Elston (Bernie Mac), Ellis forms Philadelphia’s first black swim team. He recruits from a group of young men who hang around the center, and eventually adds one female swimmer.

They struggle to be a winning swim team, but soon, Team PDR (Philadelphia Department of Recreation) is earning respect and also the ire of an all-white team, the Barracudas, the swim team of the affluent Main Line Academy. Team PDR heads for their biggest competitive test at the Eastern Regional Swimming Final, but a dark incident from Coach Ellis’ past might sink their dreams.

Pride might come across as an amalgamation of many different Hollywood sports movies, especially those based on true stories or real life events. Out of its clichés, however, comes a truly inspirational film that is both an uplifting and moving story about a teacher who encourages his pupils to be not just proud, but also determined and resolute in pursuing their goals.

The film isn’t marked by any great performances, but both Terrence Howard and Bernie Mac give high-quality turns as the fatherly and stern, but loving African-American role models. Howard as Ellis seems strangely serene, but he cleverly hides Ellis’ passion and firebrand spirit until the moments that it is most needed. Mac’s performance exposes Elston as a terse, but gentlemanly father figure who simply wants more for the young people of his community. In a time when so many are cynical without really knowing why they should be, a film like Pride will seem like a stereotype. Taken in context, however, Pride is a winning film about a man who taught marginalized children to be proud.