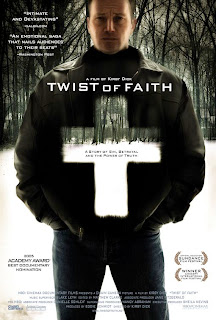 Twist of Faith is a 2004 documentary film from director Kirby Dick. This American documentary film earned a 2005 Oscar nomination for “Best Documentary, Features.” It takes a close look at one of the stories to come out of the 2002 Catholic Church child sexual abuse scandals.

The focus of this film is on Tony Comes who claimed to have been sexually molested by a priest who taught at the Catholic school Comes attended in the 1980’s. Now, a husband, father, and firefighter, Comes discovers that the now ex-priest, whom he claims abused him, lives five houses down the street from the home into which Tony, his wife, Wendy, and his two children have just moved. Tony must suddenly deal with his past, and he chooses to do so publicly. That decision brings pain and embarrassment into his life, causing marital strife and disagreements with the rest of his friends and family. He comes to distrust his Church and faith, especially when the local diocese hires a high-powered law firm to combat his and others’ lawsuits. However, Tony does get to meet and form a bond with five other men who claim to be former victims of the same priest. Much of the film deals with events that occurred in 2003 and 2004.

Twist of Faith’s publicity sold them film as being a documentary about how Tony Comes struggled with the public fallout from him going public with his claims of being sexually abused by a Catholic priest. That would have been a good film, but director Kirby Dick actually focuses on Tony Comes. Dick gave Comes and his wife hand-held cameras that allowed them to directly record their thoughts and feelings. Wendy Comes does just that – talking mostly about what Tony’s situation is doing to their marriage. Tony carries the camera around wherever he goes, so we do get to see him interact with people outside his home – fellow abuse victims, friends, and his mother (including an ugly argument Tony has with her about her continuing support of the church in spite of the wrongs Tony claims the church has done to him). However, it’s all about Tony and not really about public reaction to his personal business made private.

Wendy comes across as sympathetic, a wife trying very hard to help her husband through a bad time. Tony, on the other hand, comes across as being as pathetic as he is sympathetic. I tend to believe that he was molested, but his status as a victim doesn’t change the fact that he comes across as whiny, self-righteous jerk. He is petulant, always lashing out at his wife and mother – so bitter, and immature. He plays the victim to the hilt – a drama queen who would be right at home in some 1930’s or 1940’s era film melodrama. He is the epitome of a type we’ve seen much of since the revelations of Catholic Church sex abuse scandals: a grown-ass, 30-something white man pissing and moaning about the priest that got in his pants. That’s the kind of man who could make someone wonder if he wanted Father So-and-so in his pants.

There are some good moments in the film. Many involve Tony Comes, but many more bad ones also involve him. So anyone who has a bleeding heart for victims – any victims – will find this documentary poignant. Others may find it dull, or even – dare I say – embarrassing.