"Barbershop 2: Back in Business" is a Better Business 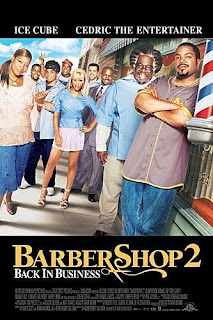 Barbershop 2: Back in Business is a hilarious character based comedy that easily surpasses its admittedly funny 2002 predecessor, Barbershop. Like the first one, Barbershop 2 relies on funny characters to carry the movie and a homey setting in Chicago’s Southside to establish the atmosphere.

Shop owner Calvin Palmer (Ice Cube) has settled into being a small business owner, and his shop is thriving. The barbers who rent from Calvin are gregarious people who are fun to be around, so many locals gravitate to Calvin’s shop for a haircut, bawdy jokes, and the generally funny atmosphere.

As in the first film, Calvin is still struggling to save his shop – this time from greedy urban developers who want to buy him and his neighbors out. They want to replace “mom & pop” business with name brand chains – including a rival barbershop called Nappy Cutz. If that wasn’t enough, some of his employees/renters are starting to get on each other’s nerves, so can Calvin save his shop and neighborhood, while dealing with complex and messy interpersonal relationships? However he chooses to deal with problems will certainly involve laugher.

Anyone who liked Barbershop should like the sequel, and I can imagine many people who didn’t like the first will enjoy Barbershop 2, since it is almost twice as funny as the original. Barbershop 2’s script simply has more zest, and the comedy flows naturally. The first time around the laughs became old shtick, and the movie lost steam. The story and plot here is relatively light, and the little guy business versus the corporate devils is a familiar tale. However, the execution of the plot and routines of the characters have a better rhythm and the timing’s impeccable. Every thing seems to happen just when the films needs a boost or needs to move onto the next joke or funny scene. As far as character pieces go, Barbershop is a work of art.

In the end, the filmmakers wrap up Back in Business with a bit too much ease. Even this lightweight story ended up having the potential to say a lot about tradition and community over greed and progress, but maybe they believed that dealing with such weighty subject matters would turn a character comedy into ensemble drama. And we did come for the laughs. What Barbershop 2 misses in dealing with real world issues, it more than makes up for in being a good time, feel good comedy that just may keep audiences laughing for years.