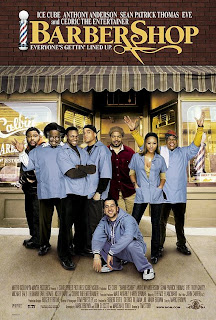 Barbershop, a recent co-production by Ice Cube’s film production company Cube Vision and State Street Pictures, is another in a recent spurt of so-called urban audience movies, i.e. movies for black people. However, the light-on-plot film was a huge hit that drew in a broad cross section of viewers, so even white folks can be entertained by film’s with little or no story as long as the characters are funny and engaging, as they definitely are in Barbershop.

Calvin Palmer (Ice Cube) is a barber like his father and grandfather before him, but Calvin has bigger dreams. He inherited his late father’s shop, but Calvin has also saddled himself with debt from a number of failed business ventures. Looking for cash to help him with his latest start up, he sells his barbershop to a loan shark, Lester Wallace (the wonderful, but seldom seen Keith David). After he takes that big step, he comes to regret his decision when he realizes that Wallace is going to turn the shop into a ho house. That really hurts because his father’s business always meant a lot to the local community.

I can forgive the weakness of the film’s plots (and subplots) because it is rich in funny and endearing characters. To be of quality, a film doesn’t have to have great characters, a great setting, and a great story; the finest and most artful films do. A good film can be strong and entertaining with just one of those elements. Barbershop holds our attention because the characters are so damned funny. The acting isn’t always tight, but the cast really gets into their characters and give a good show. In an odd way you can forgive Barbershop a lot of faults because you know that you’re always going to get another hilarious scene with these great characters.

Out of all the actors, Anthony Anderson captured my attention just as he has in Romeo Must Die, Big Momma’s House, and Life among others. He’s funny, hilarious in fact, in the tradition of portly funny men. Ice Cube is nowhere near being a good actor, but he has an excellent sense in choosing film projects that will appeal to a broad audience, whether it’s popular trash like Anaconda, a sleeper hit like Friday, or a daring filmmaking choice like Three Kings. He’s a movie star.

Barbershop is a good comedy with many funny characters. It’s warm and homespun like Soul Food, with a good down home message about family and having sense of community, at its heart. Besides who could miss a film when Cedric the Entertainer is really on his game as a funny man and an actor, especially since you get to hear him say “F*ck Jesse Jackson.”