Olympian Khatuna Lorig as "Katniss Everdeen" from "The Hunger Games" 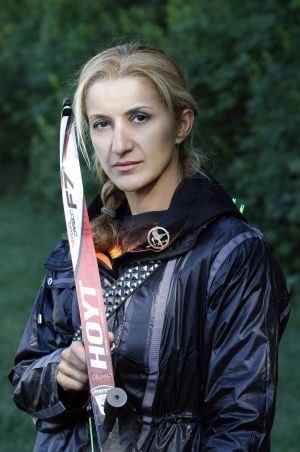 In anticipation of the release of The Hunger Games on Blu-ray, DVD, On Demand, and Digital Download on August 18, 2012 at 12:01 A.M. Lionsgate has released this image of Olympic Archer Khatuna Lorig posing as "Katniss Everdeen," the young heroine of The Hunger Games series.

Team USA member Khatuna Lorig was there at the beginning to teach actress Jennifer Lawrence how to shoot a bow and arrow in preparation for her iconic starring role. In this image, Olympian Khatuna Lorig poses as “Katniss Everdeen” in a replica jacket from the film, with a symbolic mockingjay pin, in celebration of The Hunger Games’ huge and lasting impact on the sport.

According to Lionsgate, The Hunger Games global phenomenon has inspired a surging popularity in the sport of archery demonstrated even further by the success of the United States Archery Team at the Olympics.  As of this writing, the U.S. trio of Brady Ellison, Jacob Wukie and Jake Kaminski has won the U.S.'s only archery medal in the London Games; that is the silver medal in the men's team event. It is USA Archery's first Olympic medal since 2000, and was the first medal won by the U.S. Olympic team at the London Games.

The Associated Press (via Yahoo) offers this article, "5 things to know about archery:"
Posted by Leroy Douresseaux at 8:08 AM