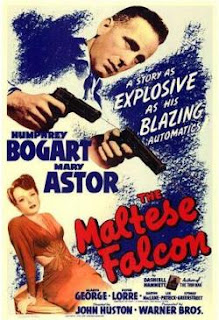 The subject of this movie review is The Maltese Falcon, a 1941 film noir detective film. It is based upon Dashiell Hammett’s 1930 novel of the same name and was the film debut of actor, Sydney Greenstreet, who earned a best supporting actor Oscar nomination for his performance. The Maltese Falcon was also John Huston’s directorial debut and went on to earn a best picture Oscar nomination.

Before the word “thug” entered the popular lexicon via Hip-Hop culture, there were men we could have called “thugs.” If we go by popular rapper Nas’s definition, a thug is “a man who answers to no one.” That describes one of my favorite characters of the golden age of Hollywood, “Bogie,” a popular nickname for that famous actor Humphrey Bogart, to a tee. Bogie was a thug, and he gave the ladies and not-so-lady-like his thug lovin;’ he answered to no man and even used cops to further his own agenda. And in no film is that more evident than in the beautiful and fantastic The Maltese Falcon, one of the great detective dramas and one of the films that created the template for film noir.

After someone kills his associate Miles Archer (Jerome Cowan) during a seemingly routine assignment, Samuel “Sam” Spade (Bogart) reasons, “When a man’s partner is killed, he’s supposed to do something about it.” He’s not “all talk,” and is certainly going to do something about the murder of his partner. Along the way of finding the killer, Spade becomes involved in a desperate quest to find and to possess “The Black Bird,” the Maltese Falcon, a legendary treasure so prized that it tangles Spade with some of the most devious and eccentric characters he’s ever faced.

There’s the damsel in distress Brigid O’Shaughnessy (Mary Astor) who first catches Archer’s eye and later Spade’s. Close on her heels is the shifty and effete Joel Cairo (Peter Lorre) who always finds himself on the wrong side of slap or a punch even when he has the gun. Finally, there’s “The Fat Man,” Kasper Gutman (Sydney Greenstreet) and his tag-along gunman (or “gunsel” as Spade slyly calls him), Wilmer Cook (Elisha Cook, Jr.). Gutman is the main mover and shaker in the scheme to get the Falcon, the man with the most dough and who is a gourmand when it comes to the finer things.

The performances are heightened to a fever pitch, and the actors play their characters with a theatrical flair. Even the dialogue crackles with energy, bite and wit, but it’s all for a good purpose. It adds style and even color to the black and white film. Most of the players fairly drip with deceit and duplicity, but the mack daddy, the playa, is Bogart’s Sam Spade. A crouching tiger and a hidden dragon, he’s always on top even when it seems as if he’s just got the bad end of things. With the ladies, especially Ms. Astor’s Brigid, he’s tough but romantic. He’s world weary, but savvy, and he has an unbreakable code of honor when it comes to his profession as a detective. It’s what drives him through the maze of weird foes and police traps to find his partner’s murderer.

Spade would define the kind of characters Bogart would play for the rest of his career, but even in this highly stylized performance, we can see a man with superior talent and ability to act in front of a movie camera. Both Bogart and his character Spade are intriguing and exciting; let this performance go down as one of the great ones.

The Maltese Falcon was the debut of legendary director and filmmaker John Huston. Although he would continue to do fine and challenging work, Huston caught lightning in a bottle with Falcon. He gave life to a genre of film and a style of filmmaking that continues to influence all of popular culture to this day. It’s a great work, and if you like movies, you should have seen it already.