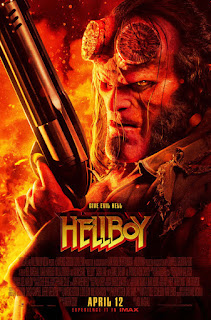 Hellboy is a 2019 superhero, horror, and dark fantasy film from director Neil Marshall.  The film is based on the Hellboy character and comic books created by Mike Mignola and published by Dark Horse Comics.  The film is a reboot of the Hellboy film franchise, which began with director Guillermo del Toro's 2004 film, Hellboy.  Hellboy 2019 finds the title character trying to stop an ancient sorceress who is bent on destroying humanity.

Hellboy opens in the year 517 A.D.  Vivienne Nimue (Milla Jovovich), the evil “Queen of Blood,” unleashes a plague on England.  King Arthur uses his legendary sword, Excalibur, to dismember Nimue.  Because even dismemberment will not kill Nimue, Arthur has the parts of her body hidden in different secret locations across England.

In the present-day, Hellboy (David Harbour), a powerful demon who works for the Bureau for Paranormal Research and Defense (BPRD), returns to the organization's headquarters in Colorado.  There, he is assigned by BPRD leader, Trevor Bruttenholm (Ian McShane), his adoptive human father, to travel to London to assist the Osiris Club, an ancient English society similar to the BPRD, in hunting three giants that are plaguing Great Britain.

Meanwhile, a pig-like creature, Gruagach (voice of Stephen Graham), is on a quest to retrieve Vivienne Nimue's limbs so that, once she is whole again, she will grant him his wish for revenge against Hellboy.  Nimue, however, has other plans for Hellboy, which don't include his destruction.  Now, only Alice Monaghan (Sasha Lane), a young spirit medium, and Ben Daimio (Daniel Dae Kim), a British “M11” agent, and Hellboy stand between Nimue and Hell on Earth.

I am not a big fan of Guillermo del Toro's original Hellboy film.  It has great production values, and is a gorgeous movie fill with fantastical visual elements.  But the story is executed in a clunky and awkward fashion and the characters are not that interesting.  However, del Toro's follow-up to that film, the Oscar-nominated Hellboy II: The Golden Army (2008), is one of my all-time favorite films, and I consider it to be one of the all-time best films adapted from a comic book.

Director Neil Marshall's 2019 Hellboy reboot was a box office bomb, with its worldwide box office failing to recoup even the film's production costs.  On the other hand, I think Hellboy 2019 is far superior to Hellboy 2004 and is closer to Hellboy II, in terms of quality.  In fact, Hellboy 2019 almost seems like a reworking of the plot of the 2008 film.

First, I should say that there are a few things that I don't like about Hellboy 2019.  For one thing, although I am a fan of the actor Ian McShane, I do not like his version of Hellboy's father, Trevor Bruttenholm, who seems to be nothing more than a monster fighting, soldier of fortune caricature.  Also, I absolutely hate the new costume and makeup design for Hellboy.  It is true that I prefer Ron Perlman, the actor who played Hellboy in del Toro's films, but David Harbour does represent himself quite well as Hellboy in the new film.  The new Hellboy is just too ugly.

Andrew Crosby's screenplay for Hellboy 2019 creates a plot, settings, and characters that genuinely seem to be part of a world deeply connected to the supernatural and to otherworldly places.  Crosby fills the story's main narrative and its nooks and crannies to the point of overflowing with strange and magical beings and places.  [See Baba Yaga.]  Hellboy's back story, conflicts, and dilemmas resonate as authentic.  For instance, Hellboy's dilemma of being caught between the world of humans and the world of monsters creates a sense of drama and conflict because it makes the viewer constantly guess about the decisions Hellboy makes.  Is he going to turn against humanity and side with the monsters, at least to some extent?  [That dilemma is raised to lesser extent in del Toro's Hellboy II.]

David Harbour takes Cosby's character work in the screenplay and creates a version of Hellboy that seems plausible and worth following around in this adventure.  As Hellboy, Harbour is as good as Perlman was as the character in Hellboy II, although (once again), Harbour's Hellboy is “fugly.”

Neil Marshall takes Cosby's script and leads his collaborators into creating a rip-roaring, hell-raising action film that is probably the first true blend of the superhero and horror genres.  Marshall's film is gripping and fun from beginning to end, with only a few bumps along the way.  It is crazy and fun to watch in its craziness

Much of the commentary I came across on the Internet said that Hellboy 2019 was absolutely terrible.  What I have discovered, instead, is that this new Hellboy film is worthy of being the first film in a wonderful new Hellboy film series.  Alas, a series is unlikely to happen after the new film's poor box office performance.  I am sure, however, that via home entertainment and cable television, fans will discover what a fine film Hellboy 2019 is.


The text is copyright © 2020 Leroy Douresseaux. All Rights Reserved. Contact this blog or site for reprint or syndication rights and fees.

Posted by Leroy Douresseaux at 6:58 PM