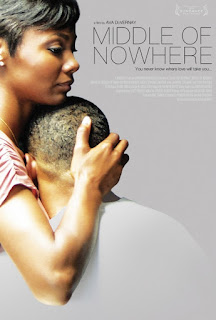 Middle of Nowhere is a 2012 drama from writer-director Ava DuVernay.  The film centers on a medical student who supports her husband while he is in prison, but who also finds herself facing unforeseen pressures that threaten their relationship.

Roberta “Ruby” M. Murray (Emayatzy Corinealdi) is a young medical student,  Her husband, Derek J. Murray (Omari Hardwick), was sentenced to several years in prison.  Ruby dropped out of medical school in order to focus on her husband while he is incarcerated.  He can be released on parole after about five years, and as that time approaches, Ruby focuses all her energy on working as a nurse and on monitoring Derek's legal situation.  After unexpected complications involving Derek arise, Ruby finds herself curious about Brian (David Oyelowo), a bus driver who is interested in her.

Middle of Nowhere is a calm and measured drama.  People rarely yell at one another; instead, they occasionally speak strongly and firmly.  It depicts people with family members in prison without the theatrics, melodrama, and Christian themes that one would get in, say, Madea Goes to Jail.  This is not a slight against Tyler Perry, as the aforementioned Madea film is one of my favorites.

I think writer-director Ava DuVernay tells her audience that there are no easy answers, absolutely none, and every decision and direction that seems straightforward is not really.  Neither a prayer nor a good cry will resolve complex difficulties.  I like that Middle of Nowhere suggests that some people are unhappy and/or ashamed of the lives they lead.  They think that there is another way they should be living – even when they are not sure exactly what that better way should be.  Where do you go when you don't know where to go?  What do you do when you don't know what to do?

I think that so many people expect so much from DuVernay as a filmmaker because her two feature films, Middle of Nowhere and 2014's Selma, are radically different from just about all other current films.  Her film narratives do not offer idealism, and she forces her characters to deal with existential realities and the truth, even if those are just about impossible to discern.

Middle of Nowhere is not perfect.  DuVernay is vague or at least distant about the history and complications between Ruby and her mother, Ruth (Lorraine Toussaint), to say nothing of what is going on with Ruby's sister, Rosie (Edwina Findley).  It is as if there is an entire side or chunk of this story left out of the film narrative.

Middle of Nowhere is important because it signals the arrival of a different filmmaking voice and of a new cinematic vision.  The truth is that mainstream American film and Hollywood need that more than most people, inside and out of film, realize.

Posted by Leroy Douresseaux at 5:28 PM