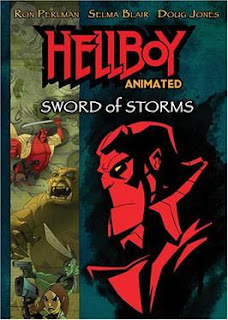 Born a little, red demon with a giant hand, Hellboy (Ron Perlman) grew up to become a hero, saving the world from supernatural horrors and apocalypse.  In his latest adventure, the Bureau for Paranormal Research and Defense (the BPRD) sends him to Japan to investigate the disappearance of a college folklore professor.  However, an ancient, enchanted samurai sword transports Hellboy to a spirit world of specters and assorted bogeymen from Japanese folklore.

It seems two storm demons defeated by the sword’s owner and subsequently imprisoned in the sword want to escape to the physical world.  Once there, they’ll open up the floodgates and allow their demonic brethren into our world.  In order to escape from the sword, the storm demons need Hellboy to shatter the sword.  While Hellboy fights in the spirit world, his partners Liz Sherman (Selma Blair) and Abe Sapien (Doug Jones) are stranded off the coast of Japan with their own hands quite full.

Hellboy Animated: Sword of Storms was originally broadcast on the Cartoon Network (October 28, 2006) before being released on DVD in February 2007.  Like 2004’s Hellboy, this animated film is based on the comic books and characters created by veteran comic book artist, Mike Mignola.  The animation for Sword of Storms is as good if not a little better than Marvel and Lionsgate’s Ultimate Avengers direct to DVD films.  Hellboy has several nice action sequences, and the character design is quite nice.

In fact, the script is not only imaginative in its use of Japanese folklore, but the writing here is much better than in the 2004 Hellboy live action film.  As far as taking viewers to exotic locales and creating imaginative supernatural scares, Hellboy Animated is similar to an Indiana Jones movie, but the character writing isn’t as good.  The voice acting is mixed – some good and some average.  Ron Perlman and Selma Blair were average to good as the live action Hellboy and Liz Sherman, respectively, and their voice performances here are the same.

Still, Hellboy Animated: Sword of Storms is really fun to watch, and I’d like to see it again.  Although this isn’t Disney level animation when it comes to creating all things magic and supernatural, this is as good as TV action/fantasy animated features get, and that’s pretty good.


The text is copyright © 2020 Leroy Douresseaux. All Rights Reserved. Contact this blog or site for reprint and  syndication rights and fees.