Review: "The Punisher" Could Have Been... But Isn't 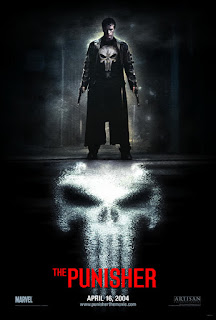 The Punisher is a 2004 action and crime thriller from director Jonathan Hensleigh.  The film is based on the Marvel Comics character, The Punisher/Frank Castle, that was created by writer Gerry Conway and artists John Romita, Sr. and Ross Andru and that made his first appearance in The Amazing Spider-Man #129.  The Punisher the movie focuses on an undercover FBI agent who becomes a vigilante assassin after a corrupt businessman slaughters his entire family.

The Punisher introduces Frank Castle (Thomas Jane), a Delta Force veteran, who recently completed his final mission as an undercover FBI agent.  After hit men kill his wife, Maria (Samantha Mathis), and their children and leave him for dead, Castle declares a one-man war on the killers’ boss man, Howard Saint (John Travolta), and his organization.  Castle also befriends three lonely misfits who share the rundown apartment building where he holes up, while popping caps and cutting throats during his mission to take down Saint and his organization.

The Punisher may be one of the worst film adaptations of a comic book or comic book character ever made, although it’s certainly not as hard to watch as The Crow: City of Angels, another misbegotten movie based on a comic book character.  The Punisher's pace is ponderous, and its plot is the embodiment of monotony.  All the acting is bad except for a decent performance by character actor Will Patton as Quentin Glass.  The character is gay, and it’s nice to see that that fact is hardly acknowledged, except as a plot contrivance).  Eddie Jemison is also good as Mickey Duka, a flunky, and a character utterly wasted by The Punisher's bad script.

Jane’s speaking parts, both as Castle and as The Punisher, amount to short, tired burst of listless and limp-wristed one-liners.  After this sorry effort as Saint, Travolta will need another career boost from Quentin Tarantino or perhaps some other hot, new director who would just love to have the revolting one in his film.

Yeah, there are plenty of explosions in The Punisher, but they’re like candles on toast.  This movie isn’t even worth recommending as a rental.

Posted by Leroy Douresseaux at 9:07 PM