Happy B'day, Wes Craven: The People Under the Stairs 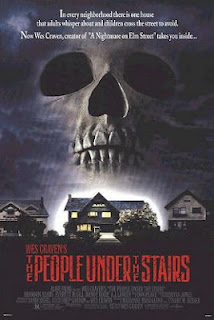 The subject of this movie review is The People Under the Stairs, a 1991 horror and fantasy film from director Wes Craven. The film has elements of the folk tale and urban legend. It focuses on an African-American boy who steals into a mysterious house to look for gold and finds that some of the stories about the house are true.

A young boy nicknamed Fool (Brandon Adams) assists two thieves, Leroy (Ving Rhames) and Spenser (Jeremy Roberts), so they can break into the fortified home of a reclusive and mysterious couple (Everett McGill and Wendy Robie), who are reportedly very rich. However, Fool ends up trapped inside the house, where he learns the couple’s horrifying secret. In the basement of their home, they have imprisoned a group of young men they kidnapped when they were boys. Fool also befriends the couple’s abused daughter, Alice (A.J. Langer), and together they try to free the people under the stairs.

Many people might scoff at the idea that the wealth of any ghetto or neighborhood is hidden in some rich, reclusive family’s house. However, it is not unusual that one family or small group of families and business interests own most of the businesses and property in a particular neighborhood or small town. Sometimes, the owners of most wealth in a poor neighborhood are people that live outside of the area. Wes Craven’s The People Under the Stairs takes this idea and turns it into a horror movie told as if it were an urban legend or folktale. For decades, one inbred, crazy family has been overcharging people for coffins and other funeral services and also growing fat and wealthy as slum landlords. This kind of family makes an ideal movie villain; put the concept in Wes Craven’s (known for directing A Nightmare on Elm Street and all three Scream movies) hands and you have the makings of a creepy thriller.

In The People Under the Stairs, the house is the star. Filled with many nooks and crannies, crawlspaces between the walls that are like pathways, a huge attic, a massive cellar, hiding spaces behind the paneling, soundproof windows and walls, barred windows, electrified doorknobs and other sadistic security devices, lots of empty rooms, the house is a great space for a chase scenes in which a desperate little black boy runs from the big, mean white man.

Craven chose Brandon Adams, a young black actor, as the hero for The People Under the Stairs because (he said in an interview) African-Americans made up a big part of the audience for horror movies, so he figured he should cast one as a lead. Adams is spunky and certainly up for the effort, even if he isn’t a stellar actor. Ving Rhames makes the most of his small part, adding a nice presence to the film. Everett McGill and Wendy Robie are delightful, campy trash as the villains and make the parts theirs alone.

The People Under the Stairs isn’t classic horror, but it’s a fun, small horror movie that holds up (at least for me) to repeated viewings. It’s certainly an example of why Wes Craven can take just about anything and make it an amusing horror flick or credible thriller.